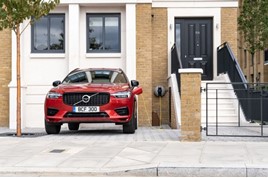 Volvo’s XC60 SUV range is now available as either a mild hybrid or as a plug-in hybrid after the manufacturer revised its powertrain options.

The mild hybrid technology is available on its 2.0-litre petrol and diesel models, and features a 48-volt battery and a KERS kinetic energy recovery system to increase efficiency.

This mild hybrid set-up can be combined with front-wheel or all-wheel drive in the 197PS B4 diesel and 250PS B5 petrol.

The 235PS B5 diesel and 300hp B6 petrol mild-hybrids are offered exclusively with all-wheel drive.

XC60 is also available with three PHEV options, each combining a supercharged and turbocharged 2.0-litre petrol engine that drives the front wheels and an electric more that powers the rear. They all have an 11.6kWh high voltage battery than can be completely recharged in two-and-a-half hours.

The entry-level PHEV is the Recharge Plug-in Hybrid T6, which has 340PS and can travel up to 32 miles on electricity alone. It has WLTP combined fuel economy up to 113mpg and CO2 emissions from 55g/km, putting it in the 14% benefit-in-kind tax band.

In the coming years Volvo Cars aims to establish itself as a leader in electrification and by 2025, it wants half of its global sales volume to consist of fully electric cars, with the rest hybrids.

Volvo has stopped taking orders for diesel-powered XC40 models to coincide with the introduction of new plug-in hybrid and fully electric versions.

The XC40 was always a frontrunner in its segment but its old powertrain line-up meant it fell short when it came to BIK. That problem is now solved.

Volvo Car UK has appointed its head of fleet and remarketing Steve Beattie to a new retail-focused role as head of sales delivery.