Harnessing data from active users of the EEVEE Driver app, the company revealed that the monthly cost of charging a Tesla costs less than a tank of petrol.

It also found that the cost of charging equates to just £0.20 per kilowatt-hour of electricity.

EEVEE Mobility founder Steffen Brans said: “This data begins to paint a picture of the real-world behaviour of EV owners and in doing so highlights one of the key benefits of EV ownership - lower running costs.

“We always knew that it’s cheaper to fill your car up with electricity rather than petrol, but thanks to EEVEE, we now know exactly how much it is costing drivers to charge their EVs.” 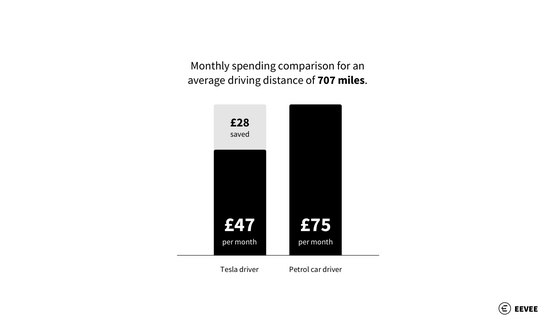 The average distance driven per month by EEVEE users is 707 miles. Based on an average fuel price of £1.30 per litre with fuel economy of 55mpg, the cost of travelling the same distance in a petrol car would be £75, representing a saving of £28 for Tesla drivers.

As some Tesla vehicles are provided with free charging from the manufacturer, the savings may vary across different brands.

The EEVEE Driver app connects directly with vehicles to unlock real-time data on consumption, cost and efficiency. By tracking spending at each charging location, EEVEE also makes it easy for company EV drivers to declare charging costs and have them reimbursed.

Among EEVEE users who charge their vehicles at home, work or in public, an overwhelming majority of charging (84%) takes place at home (likely reflecting the shift to home working due to COVID), compared to just 6% at work and 10% in public.

A lack of public charging infrastructure was cited as the biggest barrier to electric vehicle (EV) adoption by the majority (59%) of fleets that are not currently considering implementing EVs.

Government urged to introduce series of measures to ensure future of the UK’s vehicle manufacturing industry and help drivers make the switch to electric.