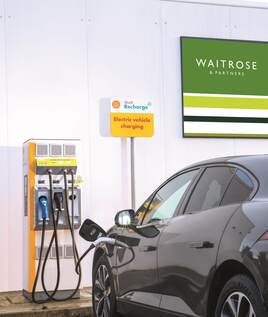 Each site is expected to have six 22kW and two 50kW rapid charging points so customers can charge their vehicles while they shop.

The first charge points are expected to go live early next year and will represent Shell Recharge’s first move into ‘destination charging’, whereby customers charge their vehicle while it is parked at a location they are primarily visiting for another activity such as shopping.

Shell’s ambition is to grow its Shell Recharge-branded network to 5,000 charge points on forecourts and other locations by 2025.

Bernadette Williamson, general manager Shell UK Retail, said: “This is great news for EV drivers across the UK, knowing they can easily, quickly and reliably charge up at Shell charge points while shopping at Waitrose.

“We want to make EV charging as hassle-free as possible and support our customers wherever they want to charge.”

The charge point deal comes as a Competition and Markets Authority (CMA) investigation has found that some areas of the development of the UK’s charging infrastructure are facing problems which will hinder the roll-out of electric vehicles (EVs).

ChargedEV, a provider of electric vehicle (EV) charging infrastructure, has been bought by the parent company of Northgate Vehicle Hire, Redde Northgate.