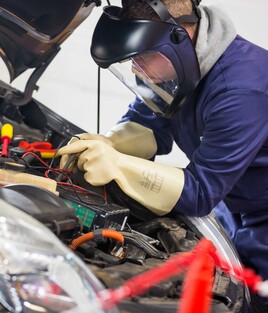 The UK faces an electric vehicle (EV) skills gap, with too few technicians to service the volume of zero emissions vehicles predicted to be on UK roads by 2030, according to the Institute of the Motor Industry (IMI).

It says that 90,000 technicians will be required to provide a sufficient workforce ahead of the Government’s Road to Zero deadline.

However, whilst the automotive sector is working hard to retrain and upskill, because of the accelerated adoption of EVs, the IMI is predicting that there will be a shortfall of 35,700 technicians by 2030, with 2026 marking the point at which the skills gap will materialise.

Steve Nash, CEO of the Institute of the Motor Industry, explained: “As of 2020, there were 15,400 qualified TechSafe technicians in the UK. That number represents just 6.5% of the UK automotive sector and was already giving us cause for concern.

“Our new analysis paints an even more challenging picture. The pace of EV adoption is accelerating, even while the issues around infrastructure remain a barrier.

“Once the charging network is fit for purpose, combined with electric vehicles becoming more financially accessible, the next big challenge will be how to ensure we have a workforce adequately qualified to provide the essential servicing, maintenance and repair to keep these vehicles safe on the roads. And that’s where we believe Government attention – and funds – should be focused now.”

Plug-in cars are expected to account for more than a fifth (21.5%) of all new car registrations next year, according to the Society of Motor Manufacturers and Traders (SMMT).

New plug-in vehicle uptake rates have accelerated so rapidly that more EVs will join Britain’s roads in 2021 than during the whole of the last decade, says the SMMT.

A total of 271,962 new BEVs and PHEVs were registered between 2010 and 2019. However, the SMMT now expects Britain to break its plug-in records, forecasting that businesses and consumers will take up around 287,000 of the latest zero-emission capable cars during 2021 alone – around one in six new cars.

Based on current forecasts, BEV registrations are also expected to exceed those of diesel by the end of 2022.

The rise is even more remarkable given that 2021 is expected to be a relatively weak year for new car registrations, some 30% below the average recorded over the past decade.

Nash said: “Whether it’s looking at incentives to retrain the existing workforce or ensuring that school-leavers and people changing the direction of their career are excited about the prospects of working in such a fast-moving sector, there needs to be a mind-shift in how to fix the widening skills gap.

“Significant investment is being ploughed into infrastructure, but the government still seems to be ignoring the fact that without a skilled workforce, it will fail in its decarbonisation ambitions.” 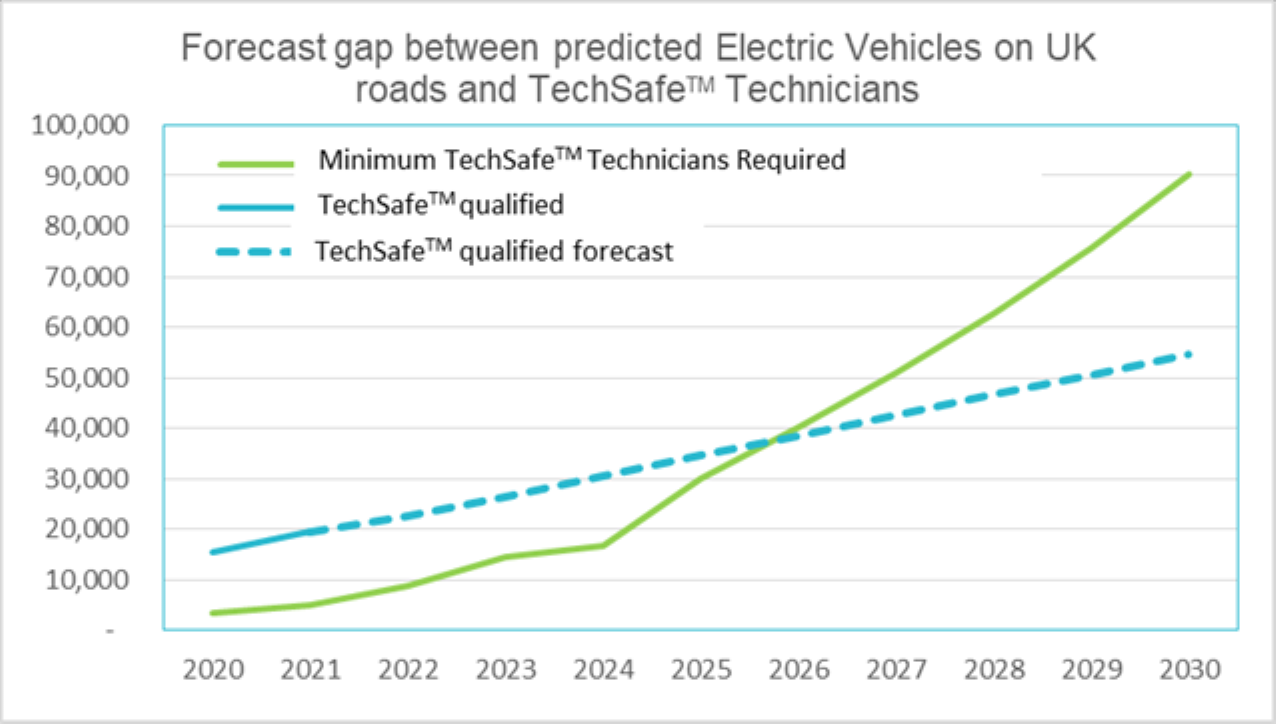 Using the SMMT’s upper scenario on EV adoption, the IMI predicts that the number of TechSafe qualified technicians required by 2030 is 90,000.

As of 2020 there were 15,400 qualified, and using current forecast trends, by 2030 there could be a shortfall of 35,700 qualified technicians, risking the safety of technicians and undermining confidence that EVs can be serviced, maintained and repaired by a garage with the right skills.

The forecast also indicates that the gap could materialise as soon as 2026 thus risking the Government’s 2030 green ambitions.

Faced with the potentially fatal consequences of an inadequately skilled workforce, the IMI is repeating its plea for the Government to commit funding to support EV skills training.

It is suggesting a £15 million boost would play a critical role, contributing towards training for up to 75,000 technicians. In the context of the £1.9 billion investment committed by Government in the 2020 Spending Review to supporting the transition to zero emission vehicles for charging infrastructure and consumer incentives, the IMI believes this is a modest figure.

It would make a significant difference, particularly for the independent sector which historically has less training opportunities compared to the franchise network which is supported by manufacturer academies, with the result that consumers will have less choice, says the IMI.

“The current gaping chasm in EV skills not only presents a safety threat for those who may risk working on high voltage vehicle systems without appropriate training and qualifications; it also means the premium on skills could add to costs for motorists, creating another, unnecessary deterrent to the switch to EV”, concluded Nash.

“The Government wants the adoption of EV to continue at a pace – the investment in EV charging needs to be matched by an investment in EV skills training to help employers ensure the workforce is EV-ready and electrified motoring doesn’t come at a premium.”

SSE transition to fully electric fleet ‘ahead of target’

Energy firm SSE is ahead of schedule in switching to a fully electric fleet, with almost half of the cars it operates expected to be fully electric in 2022.

Vinci Construction UK expects more than 20% of its 1,000 car fleet to be fully electric by the end of the year, despite only beginning its electrification journey with its first deliveries in October 2020.

Reducing its impact on the environment has long been a focus of Sureserve Group, with a variety of actions having already been undertaken.