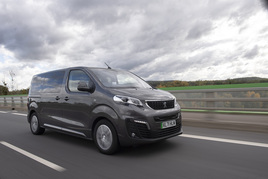 The manufacturer says that it has made the decision to focus on the e-Rifter and e-Traveller to meet the growing demand for electric vehicles (EVs).

Citroen is making passenger versions of Berlingo and SpaceTourer models only available as electric models in the UK.

Meanwhile, Vauxhall says its family lifestyle vehicles Combo Life and Vivaro Life will also go exclusively electric as part of its drive to offer an electrified variant across its entire model line-up by 2024 and be fully electric by 2028.

The move comes after the UK saw the largest year-on-year increase in EV registrations.

Last year, fully electric vehicles accounted for more than one in nine new cars sold, representing a 76% increase on 2020, according to the Society of Motor Manufacturers and Traders (SMMT).

Julie David, managing director of Peugeot, said: “Peugeot is committed to electrification, with a goal of offering a fully electric variant across our entire model line-up by 2024.

“Already we offer a fully electric van across our entire LCV portfolio, so with our award-winning MPV range now exclusively available as electric vehicles, we’re catering for the growing demand for zero-tailpipe emissions vehicles.”

Built on Peugeot’s EMP2 (Efficient Modular Platform 2), the e-Rifter can be specified as either a five or seven-seat model. Powered by a 100kW (136hp) electric motor and a 50kWh battery, the e-Rifter is capable of up to 172 miles (WLTP) from a single charge.

Peugeot’s e-Traveller is available in both Standard and Long body styles, and both variants are capable of carrying up to eight occupants.

Also powered by a 50kWh battery and a 100kW (136hp) electric motor, the e-Traveller can achieve up to 148 miles between charges.

The e-Traveller is available in Active and Allure trims for Standard variants, while Long variants are sold exclusively in Allure trim.

Peugeot has launched its fully-electric e-Rifter, offering a range of 171 miles and a choice of five- or seven-seat configurations.

Citroen has announced, with Immediate effect, that petrol or diesel passenger versions of Berlingo and SpaceTourer models will no longer be available in the UK.