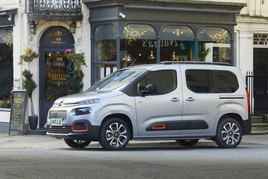 Citroen has announced - with Immediate effect - that petrol or diesel passenger versions of Berlingo and SpaceTourer models will no longer be available in the UK.

Instead, only the e-Berlingo Electric and e-SpaceTourer Electric will be available as Citroen shifts its offer in these two segments towards battery power.

Conventional, fuel-powered versions will continue to be available in LCV form (Berlingo Van and Dispatch).

The French manufacturer says it has made the decision to accelerate the switchover of these models to all-electric powertrains, for the benefit of customers and the environment.

Given the current production situation, the most recent orders placed in 2021 for the fuel-powered versions, will be delivered during 2022.

The Grand C4 SpaceTourer, which can transport up to seven people in comfort, is still included in the range with an internal combustion engine.

At the same time as the removal of the internal combustion versions from the range – and in line with Citroën UK’s principal of ‘Fair Pricing’ – there will be reductions to the manufacturer’s recommended retail prices (MRRP) of the e-Berlingo Electric and e-SpaceTourer Electric ranges, effective from tomorrow (Tuesday, January 11).

The price cut allows selected models to continue to still qualify for the Plug-In Car Grant (PiCG), which was slashed and had its eligibility criteria changed In December.

New e-Berlingo Electric sees MRRP reductions, allowing both ‘Feel’ and ‘Flair XTR’ models to continue to attract the Government grant. The MRRP for the range now starts at £30,995 resulting in a price from £29,495 once the PiCG has been applied.

The Citroen e-SpaceTourer Electric range has received a reduction in MRRP on the recently introduced ‘Business Edition’ trim level. With pricing starting from £31,795 (£30,295 with £1,500 PiVG applied) both ‘M’ and ‘XL’ lengths will both qualify for the grant.

The move to electric-only comes as fellow Stellantis brands, Vauxhall and Peugeot, made similar announcements.

Peugeot announced that its MPV range, which includes the Rifter and Traveller, will be exclusively available as electric-only in the UK.

Meanwhile, Vauxhall has reduced prices for its Combo-e Life and Vivaro-e Life Combi models to qualify for the Plug-in Car Grant (PiCG).

The family lifestyle vehicles Combo Life and Vivaro Life will also go exclusively electric as part of Vauxhall’s drive to offer an electrified variant across its entire model line-up by 2024 and be fully electric by 2028.

Citroen has introduced a new larger version of the e-SpaceTourer, with the model now available in both M and XL forms.