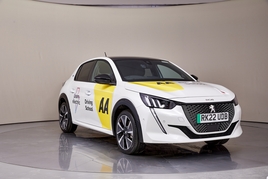 The AA Driving School has chosen the Peugeot e-208 and e-2008 to launch its fleet of fully electric vehicles (EVs) for driving instructors.

The Peugeot e-208 and e-2008 join the Vauxhall Corsa-e as the first three electric models available to the AA’s instructors.

The Peugeot cars will be available for instructors to choose from March, with the e-208 models supplied in GT trim and the e-2008 vehicles being offered in Allure Premium specification.

Julie David, managing director of Peugeot UK, said: “I’m pleased that Peugeot is able to work with the AA to offer its driving instructors two fully electric models to choose from – the fantastic e-208 and e-2008.

“With the switch to electric vehicles well underway, many younger people’s first experience of driving may be behind the wheel of an electric car.

“With ranges of over 200 miles, comprehensive safety equipment and i-Cockpit technology, the e-208 and e-2008 will offer a great driving experience for instructors and learners alike.”

A choice of charging options, including 100kW rapid charging for an 80% charge in 30 minutes.

Mark Oakley, interim managing director of AA Driving School, said: “We’re thrilled to be joining the electric revolution with Peugeot to offer our instructors two great EVs in the e-208 and e-2008.

“We’ve had enormous interest from instructors and there is a real buzz among them to teach in the new cars from March. We hope that learning in a great EV will help give power to a new generation of electric drivers.”

By choosing a Peugeot e-208 GT over its manual petrol equivalent, the AA predicts driving instructors will reduce their annual tailpipe emissions by up to 5.7 tonnes of CO2 (based on covering 28,800 miles per year), and that instructors could also benefit from a fuel saving of over £2,600 per year.

The Peugeot e-208 was the first of a new generation of fully electric vehicles from the brand. Along with the e-2008, it forms part of Peugeot’s electrification strategy, which aims to provide electrified variants of each model in its range by 2024.

Charity Cats Protection has extended its fleet sole supply arrangement with Peugeot and added the electric e-Expert van to its fleet.