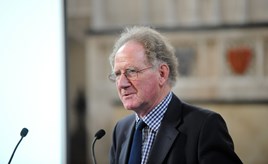 Adrian Walsh (pictured), director of the Driving for Better Business campaign, part of the Highways England business outreach programme, said: “Highways England has a great vision that it should operate a system which will gradually reduce the number of injuries and it is building safer and safer roads.

“It wants to work with you to try to reduce and manage risk so that when a collision occurs, death and serious injury will not be the result.”

Driving for Better Business is a network of ‘Business Champions’ – fleet operators who champion road safety – and a number of Fleet200 companies, including Skanska, Tesco and Iron Mountain, have already joined the campaign.

“The idea of a champion is not to be top but to champion the cause, to explain how in their businesses they have managed to achieve the levels of success that they have and they all want to strive to do better,” Walsh told delegates at the recent Fleet200 Executive Club meeting.

“It's about sharing knowledge. It's about helping people to understand how to avoid the problem in the first place; it's very often the pre-crash.”

He added: “This community has to get bigger because Highways England has this vision and it has casualty reduction targets and for a Government authority to have those two things is quite dramatic. It has also got the resources in terms of communicating, in terms of infrastructure building and in terms of leadership.”

Walsh pointed out that Highways England chief executive Jim O’Sullivan and non-executive chairman Colin Matthews both previously worked in the airline industry and understand the principles of a ‘safe system’ (a system which protects drivers/passengers).

Highways England is now working with Driving for Better Business to help achieve the highest standards of road risk management with its own fleet and its suppliers.

Highways England hashighlighted the dangers faced by road workers as it released images of an incident that left a man with multiple injuries.

Fleet200: prompt action by drivers after a collision can reduce insurance costs

Fleet decision-makers need to get their drivers to act quickly after a collision to minimise the impact on their insurance bill.