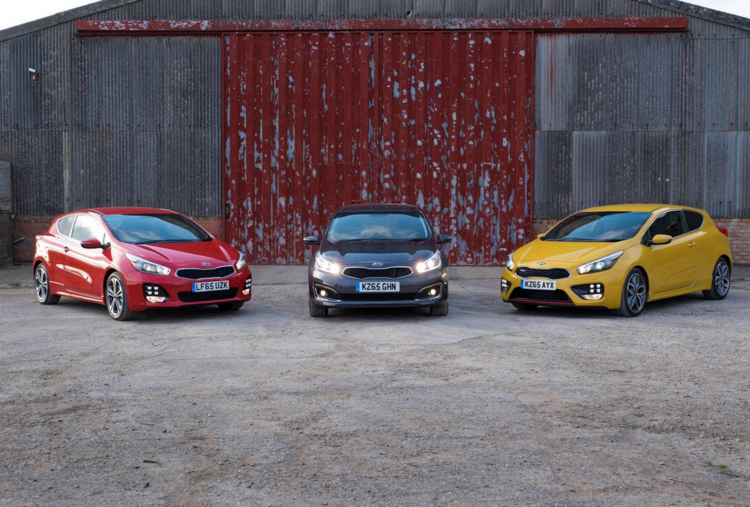 Three new turbocharged engines have been added to the Kia Ceed range and are now available to order.

The line up comprises of two petrol units and one diesel –  plus a seven-speed double-clutch (7-DCT) automatic transmission for use in conjunction with the new diesel.

The two new petrol engines are the 1.0-litre, three-cylinder, direct-injection T-GDi (ecoTurbo) units announced at the Geneva Motor Show earlier this year and designed to meet Kia’s stringent internal targets for reducing fuel consumption and emissions. Kia intends to downsize 70 per cent of its internal combustion engines in the next few years.

The T-GDi units are eventually destined to be used in a number of models, but make their debuts in the Ceed models.

There are two versions, delivering 98 or 118hp.

The 998cc engines developed in-house at Kia’s Namyang research and development facility in Korea, and have been engineered to require 10 to 15 per cent less fuel than the 1.4-litre multi-point injection or 1.6-litre GDi petrol direct-injection units in other versions of the Ceed, with similar reductions in emissions. Depending on model, fuel economy is up to 57.6mpg, with CO2 emissions from 113g/km.

The new 1.6-litre CRDi turbodiesel engine has increased power – up from 126 to 134bhp – with greater torque. CO2 emissions are down by as much as 10g/km in manual versions, and now start at 94g/km, while fuel economy is up to7 8.5mpg, depending on wheel and tyre combination.

When the CRDi engine is paired with the 7-DCT gearbox emissions tumble by almost 25 per cent, from 145g/km to 109, with fuel economy of 67.3mpg, against the previous automatic model.