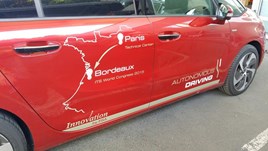 The car autonomously adjusted its speed and changed lanes to overtake, taking into account other vehicles, speed limits and infrastructure, without driver involvement.

The journey was undertaken as the vehicle will be used in a presentation at the Intelligent Transport Systems (ITS) World Congress, which runs from today (October 5) to October 9.

In July 2015, PSA Peugeot Citroën became the first carmaker to obtain the relevant authorisations to carry out open road tests using four autonomous prototypes, and some fifteen such models in 2016.

These projects will soon be applied to production models, with the gradual deployment of driverless features.

Carlos Tavares, chairman of the managing board of PSA Peugeot Citroën, said: "The journey made by our prototype proves that autonomous vehicles are no longer of matter of science fiction. This ushers in a new era for mobility, which I find truly exciting."