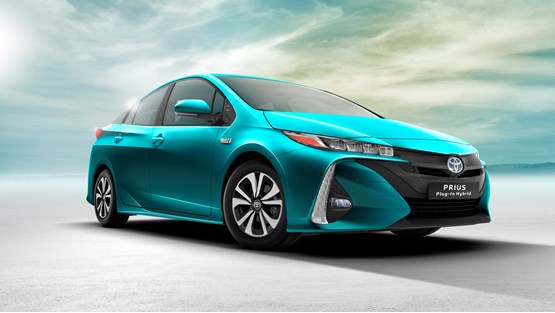 Toyota has unveiled its latest Prius plug-in model, set to emit 32g/km of CO2 with a 31 mile pure electric range.

The new Prius Plug-in will be available in showrooms from the end of this year.

The powertrain features a larger, 8.8kW/h lithium-ion battery pack, allowing drivers to enjoy the benefits of EV driving for longer periods and improving the potential driving range from a tank of fuel. It posts a substantial improvement in fuel consumption compared to its predecessor, with an estimated average figure of 202mpg, producing a CO2 figure of 32g/km.

Even when not running in EV mode, Prius Plug-in will automatically favour its all-electric drive capability in situations where this can deliver higher efficiency than the petrol engine, most notably when driving around town and on shorter journeys.

The car is equipped with a Toyota-first dual motor/generator drive system, which uses both the electric motor and generator to produce drive torque, helping boost both acceleration and overall performance.

The new plug-in hybrid system further minimises use of the petrol engine, even when accelerating quickly or using the cabin heater, with the adoption of a new battery-powered heating system that improves efficiency in cold weather, and the world’s first heat pump air conditioning system with gas injection.

ompared to the current model, it is 165mm longer, 15mm wider and sits 20mm lower to ground. As with the standard Prius, the TNGA platform has given the designers a freer hand to craft a car that has richer visual appeal, with lower lines overall and a more athletic stance.

The wind-cheating aerodynamic qualities of its styling combine with the low overall weight of its high-strength bodyshell to make a significant contribution to its exceptionally low energy consumption. Its 0.24 drag coefficient (Cd) is expected to be among the lowest of any production saloon, achieved with a number of advanced design features such as the “double bubble” tailgate glass and an automatic grille shutter which automatically closes when airflow is not needed to cool the radiator.

Weight has been kept to a minimum through extensive use of high-tensile steel in the bodyshell, aluminium for the bonnet and, in a first for a mass-produced car, a carbon fibre reinforced plastic (CFRP) tailgate.

The instrument cluster has dual 4.2-inch full colour TFT screens which display information with excellent clarity and sharpness. Their content can be changed using a menu control switch on the steering wheel.

The intelligent S-Flow automatic air conditioning system has been made smaller and lighter and uses less power. A new electric compressor provides quieter operation and the system automatically detects whether front and rear passenger seats are occupied, adjusting airflow accordingly to achieve the most efficient operation.

In Prius Plug-in this system marks a world-first by using a heat pump with gas injection. This allows it to cool or heat the cabin when the vehicle is running in EV mode, without the petrol engine being brought into play.

Other features shared with the standard Prius include a wireless phone charging tray beneath the centre stack and a colour head-up display, presenting information such as vehicle speed, battery charge, hybrid system status and Toyota Safety Sense function clearly on the base of the windscreen, so it can be seen without the driver having to take their eyes off the road ahead.