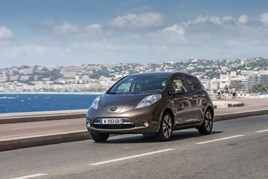 Nissan has finalised an agreement with Horsham-based Ceres Power to develop fuel cell technology that will be an alternative to hydrogen. The deal is claimed to take advantage of £772,000 in grant money from Innovate UK and the Office for Low Emission Vehicles (OLEV).

The funding, part of a £38 million fund from OLEV and Innovate UK, is intended to develop ideas to cut vehicle emissions and make plug-in vehicles drive further.

The SOFC stack is based on Ceres Power’s SteelCell technology, which is “fuel agnostic”, meaning vehicles with a SteelCell stack could generate electricity using petrol, diesel, natural gas or bioethanol as fuel.

Mark Selby, Ceres Power chief technology officer, told Fleet News: “Nissan approached us some time ago and it’s very powerful for us to have a partner that is a leader in the field of electric vehicles.

“The technology will be much easier to roll out in comparison to hydrogen fuel cell due to the infrastructure already in place for fleets to fuel a Steel Cell vehicle with widely available fuels and then move to greener LPG or bio-ethanol as the technology takes off.”

While bio-ethanol and LPG fuelling stations are virtually non-existent in the UK, they can be distributed by the existing fuel station infrastructure if demand grows.

Nissan announced last month (June) this year that it had started developing an SOFC vehicle which uses a fuel stack with bio-ethanol as the fuel source. Nissan said its e-Bio Fuel-Cell technology would give vehicles a cruising range of more than 370 miles and would have carbon-neutral emissions with exhaust gas “as clean as the atmosphere”.

The Japanese manufacturer said an SOFC vehicle would share similar features to pure EVs, with a silent drive and brisk acceleration. It also said running costs were expected to be “similar to EVs”.

Selby said he did not want fleet operators to think SteelCell technology was new or untested as it is already being used in static commercial operations to power machinery. He said the fuel cell stack technology had been trialled and introduced in a variety of fields, from 1,000kW class electric power stations to ordinary homes as a 100W power source. However, its use in vehicles will be breaking new ground.

As the project is still early in its development, Selby was not willing to share statistics on the likely range, efficiency or cost of a Steel Cell vehicle. He said the fuel cell stack could be mass produced at a competitive price due to its low-cost steel and ceramic parts. He believes applications will span cars, light commercial and heavy commercial vehicles.

The partnership with Nissan is part of Ceres Power’s plan to partner with five companies across different areas. It already has agreements in place with Honda in a tie-up with power generators and Cummins for commercial power.

Selby said there would be further announcements in the next 12 months.

How does a Steel Cell fuel stack work?

The Steel Cell is a perforated sheet of steel with a special ceramic layer that converts fuel directly into electrical power. Fuel cells convert fuel and air directly into power and heat in a chemical reaction. Fuel passes over the anode side of the cell and air passes over the cathode. Sandwiched between the anode and cathode is a very thin, electrolyte layer. An external circuit connects the anode to the cathode and provides the mechanism to take power from the fuel cell to power electrical devices such as a vehicle. A single cell can power a low-energy light bulb. Approximately 100 cells are combined to create a stack. Stacks can be placed together in greater numbers to power homes, factories or vehicles.