UK new car registrations to fleet and business were up 5% in July, while private sales fell by 6% when compared to the same month last year.

Figures from the Society of Motor Manufacturers and Traders (SMMT) show that 105,796 cars were registered to fleet and business in July, while private registrations accounted for 41% of the market at 72,727 units.

Taken together, new car registrations experienced a moderate increase in the month, up 0.1%, with 1,599,159 new cars registered so far this year, putting demand in the year-to-date 2.8% higher than for the same period in 2015 following a strong first quarter.

Mike Hawes, SMMT chief executive, said: “After a healthy start to 2016 and record registrations in 2015 the market is showing signs of cooling.

“The automotive market is a vital part of the British economy and it’s important government delivers the economic conditions which instil business and consumer confidence. With low interest rates, attractive finance options and exciting new models coming to the showrooms, the market still has lots to offer customers.”

Sue Robinson, director of National Franchised Dealers Association (NFDA) which represents franchised car and commercial vehicle retailers across the UK, said: “These figures confirm that overall retail sales are going through a stabilisation period following a positive second quarter in which GDP grew by 0.6% with the services sector up 0.5%.

“It is positive to see that alternative fuel vehicles sales remained strong up 24.7% in July, prompted by various benefits including low running costs, lower rates of Vehicle Excise Duty and financial support offered by the Government.

“Many dealers have experienced an improvement on retail demand in July compared to the immediate post Brexit situation. The UK remains a large market for the EU and performance for the year ahead is expected to be in line with market expectations.”

However, Chris Bosworth, director of Strategy at Close Brothers Motor Finance, believes it is probably still too early to gauge the effect that Brexit is having on the market as most of the cars sold in July will have been ordered prior to the vote. "This may provide an additional headwind across the market in August," he said.

“One potential side effect from any cool-down in the new vehicles market, however, is a shift by consumers towards the used car sector. According to figures from the FLA, the used car market in the UK already grew by 15% year on year during the first quarter of 2016, and our own data suggests that July was a strong month for used car dealers. This is a similar trend to that which emerged in the immediate aftermath of the financial crash, where the used car market was boosted at the expense of the new car market.

"With car production in the UK having sustained somewhat of a golden period in recent years, supply of used vehicles is catching up with demand. This could lead prices to fall, and we could well see consumers opting for well-priced ‘nearly-new’ stock." 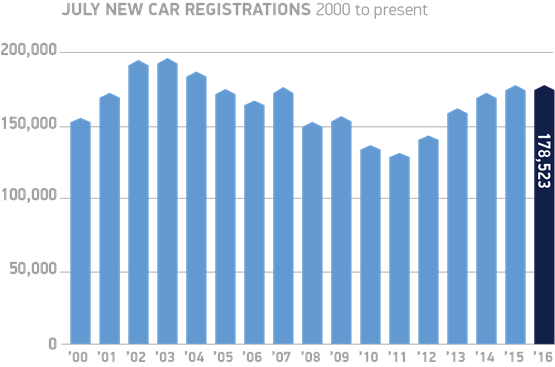 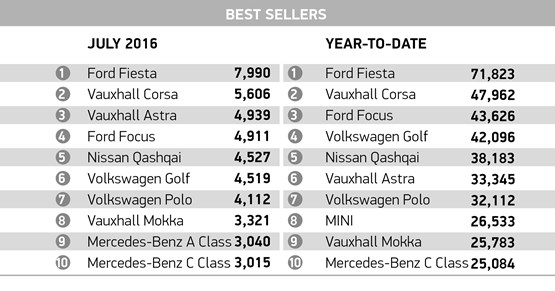