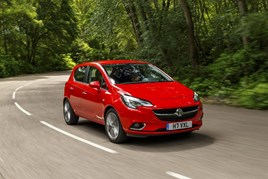 Vauxhall has issued a detailed and strongly-worded response to recent claims in The Sun newspaper that the Corsa D/E was at risk of catching fire.

The manufacturer has also briefed Transport Select Committee members and concerned MPs on its position after chair Louise Ellman called the situation “a matter of deep concern”, raising prospects of a new inquiry.

In November, Vauxhall recalled 2,767 1.4-litre Corsa Ds for an electrical fault which led to fires, following a BBC Watchdog report. The manufacturer says that customer safety is of “utmost importance”, but it adds that allegations in The Sun, based on information provided by Burnley-based forensic collision firm GBB which also produced an earlier report on Zafira B, are “wrong”.

A Vauxhall spokesman said: “When we were made aware of GBB’s original report on Zafira B in May we contacted both The Sun and GBB immediately. We urgently wanted to discuss GBB’s methodology in detail and have them explain their findings so we could identify any areas for improvement.

“GBB refused to meet then and have not agreed to our more recent request for a meeting to discuss their report on Corsa D.”

GBB and The Sun made a number of allegations which Vauxhall disputes in a statement reproduced below:

Corrosion of the Blower Motor

The first is a manipulated resistor and the second is an ageing of the resistor bronze spring leading to lower tension which in limited cases has the potential to create solder filaments during the opening of the spring.

This second root cause was confirmed after further extensive investigation by Opel Group and the Fraunhofer Institute, a highly respected independent research body.

This issue has been addressed in the second Zafira B recall with the replacement of all eutectic resistors with new wax fuse resistors.

Exhaustive tests conducted by Opel Group, the Fraunhofer Institute and our supplier show that there are no circumstances under which temperatures in the wiring harness can reach a level high enough to cause a fire.

If GBB believes that it has evidence to the contrary, we demand that it meets with Vauxhall/Opel Group immediately to explain its findings in detail so our engineers can make a proper assessment.

The same tests described above confirmed that at fan speed 4 it is not possible for temperatures to reach a level high enough to cause fire.

We are not aware of any fires in vehicles at fan speed 4 and the Fraunhofer Institute was not able to create any conditions in which a fire could occur when the vehicle was at fan speed 4.

Owners of ECC vehicles are not part of the Zafira B recall but we recognise that there are bound to be some who are concerned. That is why we instructed the Vauxhall network to agree to replace the blower motor in ECC vehicles if it is stuck or sticking. It is not admission that ECC vehicles are at risk.

We are not aware of any fires in ECC vehicles that are a result of a design or manufacturing fault. If GBB believes it has evidence to the contrary, again, we demand to meet with them as soon as possible so we can make a proper assessment.

Vauxhall contacted GBB after its latest report requesting an urgent meeting, according to the spokesman.

“If they are confident in their methodology and their conclusions there can be no reason why they would not agree to this,” he said.

“Our exhaustive investigations, conducted with the assistance of one of Europe’s most respected motor research centres, contradict GBB’s findings entirely.”

The spokesman added that Vauxhall expects to have reworked between 65% and 70% of the affected Zafira B vehicles by the end of the year. All customers who haven’t had the rework completed yet have received reminder letters asking them to book their vehicles in for repair.

Concerned fleets can get more information from Vauxhall’s website: www.vauxhall.co.uk/corsacustomeradvice.html, or by calling the Customer Care Centre on 0800 026 0034.