Was this article useful?
5 people found this useful
9 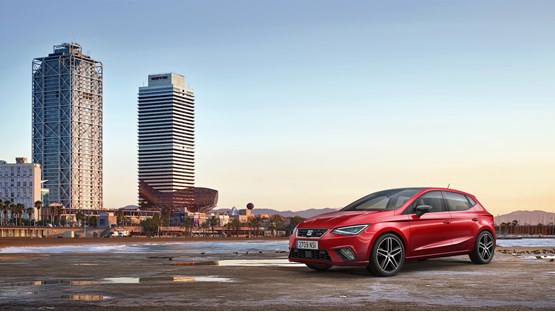 Seat has revealed the new Ibiza supermini, set to replace the current model that has been on sale since 2008.

Destined for UK showrooms in July 2017, the car is a completely fresh model that was created on the new MQB A0 modular platform. The new Seat Ibiza is the first Volkswagen Group model to use it, highlighting Seat’s importance within the Group and offering countless advantages.

The Ibiza nameplate has been around the longest in the history of the brand and is its top-selling model, with over 5.4 million units sold.

The vehicle is much wider by a notable 87mm, as well as two millimetres shorter and one lower than the previous model, but more than anything, the change in its dimensions conveys a powerful image of a car that hugs the ground.

The track is 60mm longer at the front axle and 48mm at the rear axle, while the distance between the axles is 2,564 millimetres, a 95mm increase.

Leg room in the back seats has increased by 35mm, while head room has gone up by 24 mm in the front seats and 17mm in the rear. The seats are 42mm wider too. The boot has also been enlarged by 63 litres, bringing its total capacity to 355 litres, making it best in class. The loading height has also been lowered, proof that SEAT knows how to combine design and functionality.

The first engine option is the three-cylinder 1.0 TSI with 95 or 115PS, along with a turbo-compressor, intercooler and direct injection. A new EVO 1.5 TSI unit will also be available in late 2017 with four cylinders and 150PS. 1.6 TDI diesel engines will come in 80 and 95PS guises in the UK.

The Ibiza will now be solely offered with five doors, losing the estate and three door variants.

The new car will be offered in four trim levels at UK launch: S, SE, FR, plus, a new Xcellence version.

The driving assistance systems options available on the all new Ibiza include Front Assist, Adaptive Cruise Control, Keyless Entry System with heartbeat engine start button, a new generation of front and rear parking sensors and a rear view camera with a higher quality and precision reflected in a premium eight-inch touchscreen.

Inside, the car offers a wireless charger with GSM amplifier. Apple Car Play, Android Auto and Mirror Link are also available under the Full Link banner.