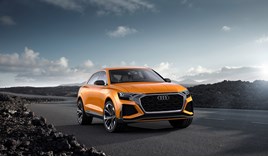 Audi will launch a Q4 SUV alongside the Q8 and three e-tron battery electric vehicles, while also replacing five core models, by 2020.

The brands ambitious plans were announced at its annual general meeting and will begin with updates of the A8 and A7 luxury saloons this year.

The brand will then embark on a stategy to electrify 30% of it models by 2025.

Audi is utilising Volkswagen Group synergies in order to implement future technologies even faster and more efficiently. In April, the brand agreed on new development cooperation with Porsche for future vehicle architectures. Part of the cooperation is the development of shared premium architecture for electrification – an effective lever to enhance the competitiveness of electric cars.

In addition to the traditional car business, the brand will expand its range of digital services in the future. With myAudi, the company aims to create a consistent entry into the brand’s digital world and establish a platform for a wide range of online services, which will be open also for third-party providers to offer services. Audi is also expanding its mobility services for urban areas and intends to offer them in more than 15 markets worldwide by the end of this decade.

Audi will take over the leading role within the Volkswagen Group in the development of autonomous driving. Autonomous Intelligent Driving GmbH is working on the technology for driverless vehicles in urban environments, which will be applicable in models of various brands. The technology is to be ready for application in a first small series of cars early in the next decade.

Audi is celebrating a hat-trick of success following the Fleet News Awards, including winning the prestigious honour of being named fleet manufacturer of thet year.

Audi’s busy year saw it introduce the latest generation A4 range and launch a car into a new sector with the Q2, as well as make important updates to the A3 range maintaining its desirability over rivals. They have ensured the product line-up still has plenty of appeal for fleets.