All-new Audi A8 to feature electrified powertrain as standard 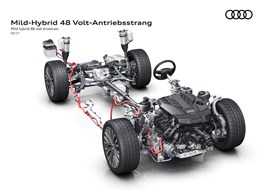 The all-new Audi A8 range which makes its debut next month will be the first in the brand’s history to feature an electrified drivetrain as standard.

The combustion engines powering the next generation of the saloon will be equipped with mild hybrid technology based around a 48-volt electrical system which features as the primary electrical system for the first time.

The mild hybrid drive comprises two main components: first, the watercooled 48-volt belt alternator starter (BAS), which complements the conventional pinion starter. The latter is only required for cold starts in the new Audi A8. Then there is the lithium-ion battery in the luggage compartment to act as the energy accumulator for the MHEV (mild hybrid electric vehicle) with a 10 Ah charge carrier capacity and a 48-volt system.

The advantage of the BAS becomes particularly clear when the driver approaches a red traffic signal or a roundabout. If the traffic signal turns green during braking while the vehicle is coasting to a stop or if a gap appears for the driver to move into, and the driver releases the brake, the combustion engine is started immediately. The car accelerates without any delay. This is all thanks to the belt alternator starter, which is permanently connected to the combustion engine.

The fourth-generation A8 can enter the noiseless coasting mode within the speed range of 34mph to 99mph, and can then coast with zero emissions for up to 40 seconds with the engine off altogether. As soon as the driver depresses the throttle pedal again, the BAS prompts a swift, restart. In addition, start/stop operation is active from 14mph.