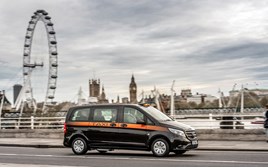 The Mercedes-Benz Vito Taxi is outselling all other models to take a 55.1% market share in London, with 489 Vito Taxis licenced January to August 2017, compared to 399 TX4 during the same period, according to Transport for London figures.

The Vito can carry up to six passengers and is  fully-wheelchair accessible. Standard equipment also includes fuel-saving BlueEfficiency measures such as engine start/stop function, air conditioning for the driver and passengers, electric folding mirrors, electrically operated sliding doors on both sides and an electrical nearside and off-side step.

Steve Bridge, managing director, Mercedes-Benz Vans UK, said: “We know that for both cabbies and their customers, Vito Taxi provides the most comfortable, efficient journey, and the results for 2017 so far speak for themselves – we are outselling the competition.

“What this does mean though, as that there are very limited numbers left for 2017 so if any of the taxi fraternity wanted to experience a new Vito Taxi, time is running out."