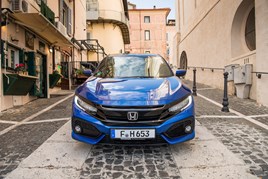 Honda remains committed to diesel engines in the Civic, despite its latest CR-V dropping it in favour of petrol-electric hybrid.

The new CR-V for Europe, unveiled at the Geneva motor show in March, will be available with either a petrol engine or a petrol-electric hybrid.

Honda has recently launched a diesel version of the latest Civic, with an updated version of its 1.6-litre i-DTEC engine, while every diesel Honda engine since 2003 has been designed and engineered for Europe.

Honda’s head of car, Phil Webb, said: “Diesel remains an integral part of the UK market and particularly the corporate market, so we are committed to diesel in the current Civic.”

The move contrasts with Toyota’s decision to phase out diesel in its ‘passenger car range’, retaining it only in larger 4x4 vehicles, and launching the new Auris in 2019, a rival for the Honda Civic, with petrol or hybrid options.

Marc Samuel, fleet sales operations manager at Honda, said: “We’ve witnessed a lot of pent up demand for diesel in the new Civic, which has been on sale for a year with only petrol engines.

“We think there will be a place for diesel in our car line-up until 2025, and for now, diesel is still the best engine option for many roles.

“It’s still important for the C-segment, and a diesel version of the new Civic is something many people have been asking for, and it’s a variant we have done very well with in the past.

“Bringing diesel into the Civic line-up allows us to do business with some fleets who still operate diesel-only policies.”

The new Civic diesel, using a revised version of Honda’s diesel motor, has been tested under the new, more stringent WLTP (Worldwide Harmonised Light Vehicle Test Procedure) conditions, and yet achieves a figure of 80.3mpg on the combined cycle, and a derived CO2 emissions figure of 93g/km – better than its predecessor.

But Honda is aware of changing attitudes among consumers, and is planning to add electrified models to its ranges in future, as well as pure EVs.

Webb said: “Globally, by 2030, two thirds of our models will offer some form of electrification, and in Europe this will happen by the end of 2025.”

Samuel added: “Some public sector fleets are now looking for hybrids and electric models, and what we have coming in future will allow us to serve these customers too.”

The Urban EV concept, shown at Geneva in March, would evolve into a production car in 2019 and would become Honda’s first mass-produced battery electric car for Europe.

He added that the revamped corporate team at Honda was seeking to use models such as the diesel Civic, and future products, to increase its participation in the corporate sector.

“We are now more consistent, and speak to our customers more often. And we are continuing to work with our dealer network.”

He said Honda has been increasing the number of dealers involved in its Platinum Programme that involves special training and standard, helping retailers more effectively meeting the needs and expectations of corporate customers.

Pricing for new Honda Civic diesel will start from £20,120

Pricing for the new Honda Civic diesel will start from £20,120 for the entry-level S model with manual transmission rising to £24,925 for an EX trim car with the six-speed manual gearbox.