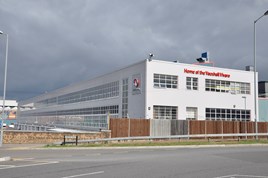 As the European LCV market leader, Groupe PSA says it intends to strengthen its market share in this segment in Europe and accelerate its development in the other regions. And, this increase in manufacturing capacity in the compact vans segment, it says, will come from the Luton plant by 2019 in addition to the existing Hordain facility in France.

The investment in Luton is driven through a performance plan negotiated between the Unite Trade Union and the Luton plant (UK), combined with its recognised know-how in the manufacture of light commercial vehicles (LCV) and the flexibility of its existing paint shop. With this initiative, the EMP2 platform for LCV will be localised by mid-2019, as part of the convergence on Groupe PSA technology, it said.

The deal, which secures 1,400 jobs in Luton, has been made possible, says Groupe PSA, thanks to the Unite union guaranteeing production flexibility and the support of the UK Government and Luton Borough Council, despite Brexit uncertainties.

As part of the announcement, Vauxhall has committed to invest further in the plant, supplementing £9 million of Government funding to install a new manufacturing platform.

In 2017, the plant produced 60,000 Opel/Vauxhall Vivaros. The investment aims at increasing the plant’s production capacity to 100,000 vehicles per year based on Groupe PSA’s EMP2 shared platform.

“Performance is the trigger for sustainability and I would like to thank all stakeholders involved and underline the open mindset of our union partners, as well as that of the UK Government,” said Carlos Tavares, chairman of the managing Board Groupe PSA.

“This is a major milestone for the future of the Luton plant and a key enabler to serve our ambitions in the commercial vehicle market, guaranteeing customers the best offering in this segment.”

Michael Lohscheller, CEO of Opel/Vauxhall, added: “It is also a clear recognition of the skilled people who have customer satisfaction at the core of their priorities. As we have often stated, we have our future in our own hands and we need to unleash the full potential of the employees."

The leader of Unite, general secretary Len McCluskey, hailed the proposed investment into PSA’s Luton van plant as a "deserving tribute to a dedicated workforce’". However, he also called upon PSA to remove the cloud hanging over the company's Ellesmere Port plant too, which is also awaiting a new model.

He said: "The investment into Luton is very welcome, but we do expect to hear of similar plans for Ellesmere Port, where the workforce has been just as loyal and is just as deserving of a secure future but continues to live with a cloud hanging over it."

Speaking at the Vauxhall Luton van plant today, where French owners PSA announced that there would be investment of £170 million to bring a new model to the UK and create 450 new jobs, McCluskey continued: “This is a very welcome investment in Luton by PSA, and a deserving tribute to a dedicated workforce. It will steady nerves at the plant after years of uncertainty.

“It will, of course, be for the members at the plant to decide whether to accept the whole package of measures, including a pay deal along with the new product, and they will take that vote in the coming weeks.

“Vauxhall is a highly regarded British brand with over a century of motor manufacturing with a strong and loyal UK customer following. Add to this the excellent productivity at our plants and the case for PSA to build a long-term home in the UK is a compelling one. I look forward to sitting down with Mr Tavares very soon to bring good news to Ellesmere Port too.”

Business Secretary Greg Clark welcomed the Luton announcement. He said: “Today’s decision is a vote of confidence in Vauxhall’s high skilled workforce and the UK’s world leading automotive sector.  This investment in upgrading the production platform will safeguard and grow jobs, ensuring the future of the Luton plant well into the next decade and help ensure the plant is well positioned for future Vauxhall models to be made in the UK.

“We have been clear in our commitment to the automotive sector which is why, through the Industrial Strategy, we established a landmark Automotive Sector Deal that will see us working with industry to put the UK at the forefront of new technologies.”

Mike Hawes, SMMT chief executive, concluded: "The UK continues to be a centre of excellence for vehicle production thanks to our engineering expertise, high levels of productivity and a collaborative relationship with government which has enabled us to build a robust industrial strategy and a sector deal.

"We will continue to work with policy makers to ensure the UK remains as competitive as possible now and in the future so we can continue to build on our long heritage in vehicle manufacturing."

Groupe PSA is to work with the Unite union to 'rebuild the industrial performance of the Vauxhall factories in a reasonable manner'.

Vauxhall has laid out plans for a more “conservative” year in 2018 as the market faces challenges over economic uncertainty,

Plans to cull more than 100 of Vauxhall’s 324 UK retail locations within the next 12 months has been announced by PSA Group.