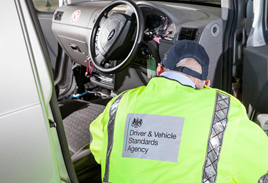 The Driver and Vehicle Standards Agency (DVSA) will now give manufacturers a 10-day deadline before it legally forces them to recall vehicles or face prosecution.

The clarification on the DVSA’s powers has followed in the wake of investigations into Vauxhall’s Zafira model B fires and BMW’s recall of 312,000 vehicles due to an electrical fault caused by a B+ battery connector.

In terms of the BMW recall, fleet operators are unlikely to be affected as the vehicles hit with the problems were built between 2007 and August 2011, although it could still create an issue for any grey fleet vehicles.

BMW first issued a recall of 36,000 vehicles in April 2017 after the death of Narayan Gurung, a former Gurkha soldier who was killed when his car crashed into a tree after he swerved to avoid a broken down BMW.

A further 312,000 vehicles were recalled on May 9 this year, the same day the BBC Watchdog programme exposed the issue.

The DVSA now has a different process when approaching manufacturer safety-critical recalls driven by clarity over what powers it has.

DVSA chief executive Gareth Llewellyn told a Transport Select Committee meeting on June 26 the process needed to change as “there have been occasions like with Vauxhall and BMW, where the flow of information wasn’t the same as it was with other cases”.

He said: “We now send a letter to a manufacturer to say the DVSA will be legally forcing a recall within 10 days, which will be made public unless the manufacturer can prove why the recall isn’t necessary.

“It then triggers the potential for the DVSA to prosecute the manufacturer if it doesn’t issue a recall and fails to respond adequately within the 10 days.

“The DVSA can also write to all of the affected customers to tell them about the fault and to say that it has asked the manufacturer to recall affected vehicles, but it has failed to do so.”

Furthermore, the DVSA wants more influence and involvement with manufacturers’ initial risk assessment of a fault to determine whether a technical or safety critical recall is necessary.

However, Llewellyn said there are hundreds of recalls a year in the UK, the majority of which are not safety-critical.

He said: “With most manufacturers, the vast majority of recalls work really well.

“But we want to be very clear that there’s reputational damage if I, as a regulator, force you to undertake a safety recall on what can be a large fleet.”

Once a safety recall is issued, data is released by the DVSA so any vehicle can be checked on its website. For fleet owners, operators and businesses that provide fleet services, a vehicle with an outstanding recall would see insurance voided.

Failure to check a car for an outstanding safety recall could also lead to a fine of up to £20,000 and up to three months in prison.

Recalls can sometimes be missed when the vehicle is defleeted and sold into the used market. The BVRLA was working on a free safety recall notification system called ReCare back in 2013 for the leasing industry but the project did not gain sufficient support from manufacturers and was later closed.

The Society of Motor Manufacturers and Traders (SMMT) has since launched its Vehicle Safety Recall Service which allows fleets and leasing companies to monitor outstanding recalls. Results are usually returned within an hour but there is a charge for the service.

Hannah said: “We have been trying to get recall data handled through the 1Link platform as this is where more than 95% of manufacturers and leasing companies do their day-to-day work.”

In the absence of that option, Hannah said in Ogilvie’s case, recall data is taken directly from the manufacturer and then a notice is sent to the relevant fleet manager.

The recall progress is then tracked through an email trail and once the repair work has been completed it is shown as complete in a vehicle’s history file within the fleet management system.

Mercedes-Benz will recall around 400,000 vehicles in the UK as it seeks to fix a potential airbag safety issue.

The SMMT, together with the DVSA, is calling on UK fleet operators to join the millions of consumers who have checked if their vehicles have an outstanding safety recall.

A coroner has highlighted the DVSA’s lack of demands for BMW to recall cars prone to sudden power failure in concluding an inquest into the death of a former Gurkha who died in a collision involving a stricken 3 Series saloon.