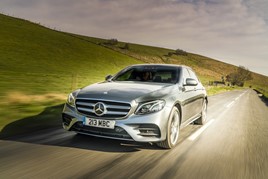 Mercedes-Benz has revised the engine line up for the E-Class and CLS adding new mild hybrid powertrains.

It uses an inline six-cylinder petrol engine with Mercedes-Benz’s EQ Boost technology. It has an output of 367PS, with an additional 22PS available thanks to EQ Boost.

The E-Class All Terrain also feature the new diesel motor, with prices starting at £64,445.