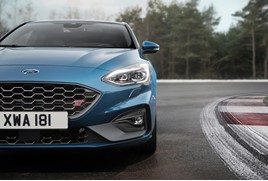 Ford will reveal significant electrification, commercial vehicle and SUV news as part of the company’s vision for a new era of mobility at a special ‘Go Further’ experience in Amsterdam, Netherlands, on April 2.

Steven Armstrong, group vice president and president, Europe, Middle East and Africa, Ford Motor Company, and incoming chairman, Ford of Europe, will be joined by an executive leadership team including Stuart Rowley, incoming president, Ford of Europe, to unveil news and products including a diverse family of electrified powertrain solutions for Ford customers.

“Our new Fiesta and Focus EcoBoost Hybrid models are examples of Ford’s commitment to deliver new, more environmentally sustainable vehicles, sophisticated technologies, and valued services for our customers, and we have many more examples to announce in Amsterdam next week and beyond,” Armstrong said.

“We’ve gone to every length to develop mild-hybrid powertrains for two of our most popular cars that will help keep cash in customers’ pockets while remaining true to the Ford ‘fun to drive’ philosophy.”

The BISG also acts as a motor, integrating with the low-friction, three-cylinder 1.0‑litre EcoBoost combustion engine and using the stored energy to provide torque assistance during normal driving and acceleration, as well as running the vehicle’s electrical ancillaries.

“Our 1.0-litre EcoBoost engine has already proven that fuel-efficiency and performance can go hand-in-hand. Our EcoBoost Hybrid technology takes that to the next level,” said Roelant de Waard, vice president of marketing, sales and service for Ford of Europe.

“We believe customers are going to love the smooth and urgent power delivery of our EcoBoost Hybrid powertrains just as much as they’ll enjoy less-frequent trips to the fuel pumps.”

In addition to the Fiesta and Focus EcoBoost Hybrids, the new Mondeo Hybrid wagon was unveiled earlier this year, featuring a full-hybrid architecture.

Ford also is introducing mild-hybrid powertrain solutions to enhance the fuel-efficiency of the Transit 2-tonne and Transit Custom vans, and the Tourneo Custom eight/nine-seater people-mover, on sale later this year.

Furthermore, Ford earlier this year announced that every one of the company’s nameplates launched from the all-new Focus onwards will include one or more electrified options. This includes new nameplates and new versions of existing vehicles. From Fiesta to Transit, either a mild-hybrid, full-hybrid, plug-in hybrid or full battery electric option will be offered.