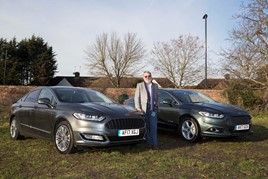 A Ford Mondeo Hybrid managed to return 123.8 mpg over an 80 mile journey, as part of an eco-driving challenge.

The Mondeo took part in the historic Layer Marney Cup, a fuel consumption run that first took place in 1914.

Owen Gregory, fleet director at Ford, said:  “Congratulations to Andy, John and the Mondeo hybrid for returning such a ‘green’ result in a large car.  We’re seeing increased interest in the car based on the range anxiety associated with a battery all-electric vehicle and avoiding stationary charging, which is difficult anyway without off-street parking.”

The hybrid is charged on the move by recouping lost energy while braking rather than needing to be plugged in.

Dawson said:  “It has been my aim to achieve more than 100mpg in a petrol car for some time, and 123mpg achieved that by quite some margin thanks to man and machine.  In this case my machine’s ‘brake coach’ encouraged gradual braking to maximise the energy I saved.”

He previously achieved 122mpg from a diesel Fiesta.

Other vehicles competing in the challenge included a 1914 Ford Model T that achieved 27.2mpg and a Toyota Auris Hybrid, which managed 68.2mpg.

Full results of the 2018 Layer Marney Cup can be found here.