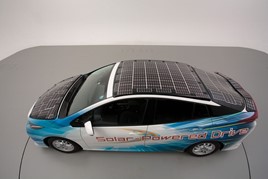 Toyota is to start public road trials later this month of a Prius plug-in hybrid equipped with solar panels which could generate enough electricity per day to power the car for 35 miles.

The joint project between the car manufacturer, Sharp and NEDO, has seen a high-efficiency onboard solar battery panel installed on the roof, bonnet, tailgate and other parts of the vehicle.

If the vehicle is being driven, then the maximum charge to the driving and auxiliary battery will be equivalent to the car traveling 35 miles on electricity alone.

If the car is parked, then the charge delivered will be the equivalent of 28 miles.

These figures are a huge improvement on the solar charging system currently available for the Prius plug-in in certain markets, which generates charge equivalent to four miles range when the vehicle is parked (per day).

By enhancing the efficiency of the solar battery panel and expanding its onboard area, Toyota was able to achieve a rated generation output of around 860W, a figure around 4.8 times higher compared to the production Prius plug-in model equipped with a solar charging system.

The trial will take place in various driving conditions in Toyota City, Aichi Prefecture, Tokyo and other areas.

Data, including the solar battery panel’s power generation and the amount the drive battery is charged, will be gathered and verified, and used in the development of an on-board solar recharging system.

The PV-powered (photovoltaic) Vehicle Strategy Committee, sponsored by NEDO and others, will evaluate the benefits based on improvements in CO2 emission reductions and convenience, such as the number of times a vehicle needs recharging.

The goal is to contribute to the creation of a new solar battery panel market, including the transport sector.

Earlier this year, Toyota retained the Fleet News green fleet manufacturer of the year award, the third time in the past four years it has been recognised as the most environmentally aware automotive company.

Toyota Financial Services has bought a majority stake in ride-sharing platform Faxi in order to develop its own car-pooling platform.

Toyota (GB) has appointed James Mackintosh and Hayley Kirby as public sector managers, to promote the benefits of hybrid to local authorities and public organisations.

Centrica, SSE and Mitie to switch fleets to electric by 2030