True fleet sales down 7.2% in June but LCV shows growth 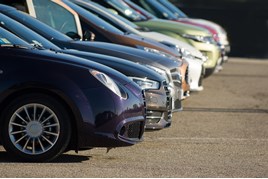 UK true fleet sales were down by 7.2% in June, which leaves the channel down 6.2% year-to-date (YTD) and without growth during Q2.

The private market was also in decline, leaving the UK new car market 4.9% behind its performance in June 2018, with 223,000 registrations.

Not all manufacturers suffered equally. VW remains the leader in true fleet sales, with Ford holding second place thanks to strong performances from the Fiesta, Ecosport and Ka+. 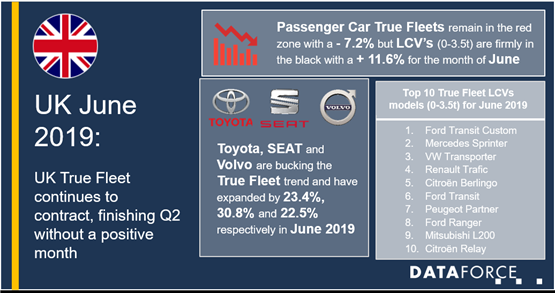 Toyota and Seat took eighth and ninth respectively and both these manufacturers seem to be bucking the overall trend, gaining some great results for not only the month but YTD as well.

Volvo also performed well, taking 15th position for June with an increase of 22.5%, but even more impressive is its current result YTD, where it has achieved a + 44.9%.

A quick look at the model range identifies the XC40 as the star performer, but its big brother the XC60 is not too far behind.

LCV market is polar opposite to passenger car

The clear leader in the UK is Ford with almost double the amount of registrations YTD than its next rival in the standing, Mercedes.

Mercedes and also Renault (sixth) have made significant gains with a +47.7% and 27.0% growth respectively, thanks largely to the Sprinter and Trafic.

Seat achieved its best ever true fleet sales last year with 18,825 registrations – 27% more than in the previous year.

Volvo Car UK has seen rapid growth in its true fleet sales in the first half of 2019, with registrations up 43% on last year.