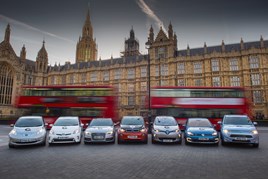 Registrations of electric vehicles (EVs), including hybrids, totalled 96,600 units in July in Europe – as demand increased by 29% from July 2018.

“Even if they still makeup a comparatively marginal part of the overall market, electric vehicles are definitely becoming the industry’s bright spot during these challenging times,” said Felipe Munoz, JATO’s global analyst.

The increase in EV’s market share came as a result of the outstanding performance of pure electric cars (BEVs), where volume was up by a huge 98% to 23,200 units.

Hybrid vehicles also performed well in July, as demand increased by 27% to 56,800 units.

As usual, the rankings were dominated by Toyota and Lexus, but there were notable results from Mercedes, which came third, and Land Rover, whose new Evoque model became the fifth best-selling hybrid electric vehicle (HEV) during the month.

Despite continuing economic uncertainty and diminishing consumer confidence, it helped the European car market register growth in July, as overall registrations were up by 1.2% to 1,325,600 units.

Although the growth was marginal, it marks a significant improvement on the drop seen in June, when registrations fell by 7.9%. However, the result is not significant enough to offset the market’s overall performance so far in 2019, with year-to-date figures showing 9,723,400 vehicles have been registered – a 2.5% drop on the same period last year.

Munoz said: “There is uncertainty in Europe. After many years of growth, the market shows signs of deceleration that is likely to continue if the German economy fails to grow again.”

The growth seen in July was driven by the midsize and small markets, as 14 of the 27 countries analysed in JATO’s insights saw increases. Again, the situation is not as positive in the year-to-date figures, where only 10 markets have so far recorded growth.

Consumers bought 505,900 SUVs in July, as demand increased by 8.7%. This result puts fears of a deceleration in the segment to rest, which was a concern after demand for the car type slowed to the lowest recorded rate in June. However, the increase seen in July 2018 was still lower than the 35%, 18% and 12% increases seen in July 2018, July 2017 and July 2016, respectively.

VW Group also dominated the rankings by model, as its Volkswagen brand placed four models inside the top 10.

The most surprising result of the month was the Dacia Sandero, which came third in the rankings – the best ever result for the Romanian model. Elsewhere, the Opel Corsa saw a volume increase of 28%, boosted by strong demand in Germany (+82%) and Spain (+153%). 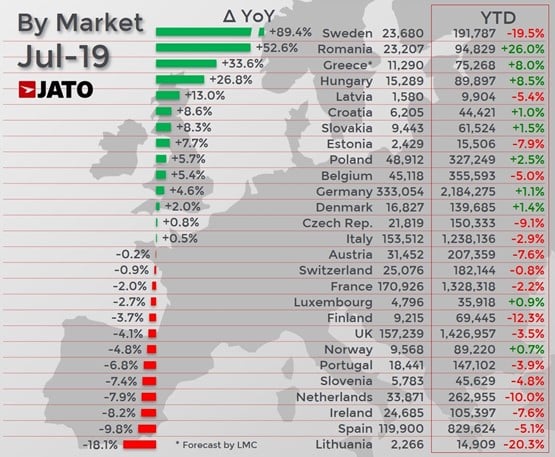 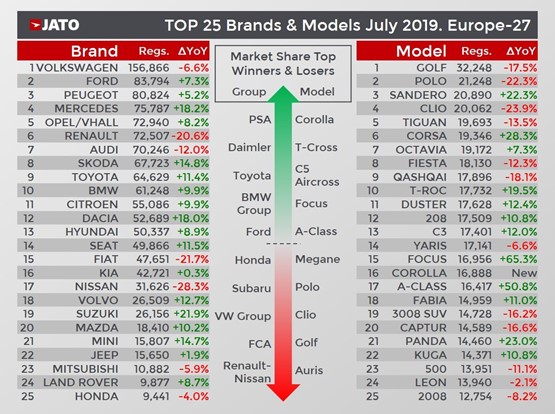 Electric Vehicles (EVs) and its charging accessibility remain the biggest factor for those who have not made the permanent switch, says a new survey by Venson Automotive Solutions