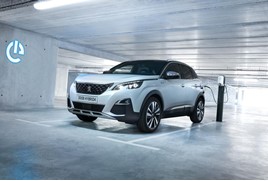 The new model will be available to order later in the year and will attract a 10% BIK rate for vehicles registered after April 2020.

The front electric motor is coupled to an electrified eight-speed automatic transmission, while the second motor and differential are integrated into the electrically-powered rear axle.

Peugeot will also offer a 225PS single motor front-wheel-drive version of the plug-in hybrid 3008, which we be launched after the Hybrid4.

The Hybrid4’s 13.2kWh battery provides up to 36 miles of 100% electric, or zero emission range, with a full charge taking less than two hours using a seven kW chargepoint.

David Peel, Managing Director of PEUGEOT UK, said: “The 3008 SUV GT Hybrid4 is the next step in PEUGEOT’s electrification journey. It will join the all-new e-208 and e-2008 SUV, and follows our philosophy of ‘choose your PEUGEOT, choose your powertrain’, as 3008 SUV buyers have the choice between efficient petrol, diesel and the plug-in hybrid electric technology for their car.”

The 3008’s sister car, the Vauxhall Grandland X, is also offered with the same powertrain but has slightly higher emissions of 32g/km.

There’s a lot to like in the 508, both in terms of design and performance, but visibility is a little restricted.

Peugeot has confirmed the UK pricing and specification for the new 208 range, which will be available from £16,250.