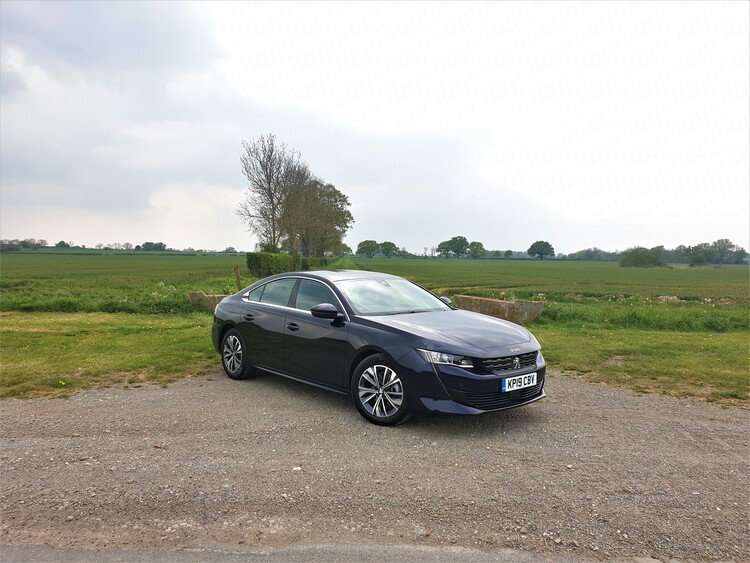 There is something a little bit different about the Peugeot 508 that will be missed as it leaves the Fleet News long-term test fleet.

Eye-catching design features, both inside and out, highlight its French credentials.

The front tusk-like LED lights and fastback styling give it that kerbside appeal, while the small, cropped steering wheel and piano key-style controls maintain that attention to detail inside.

Design-conscious company car drivers could be easily swayed when comparing it with rivals such as the Audi A5 and Volkswagen Arteon, especially when its appeal is not just skin deep. 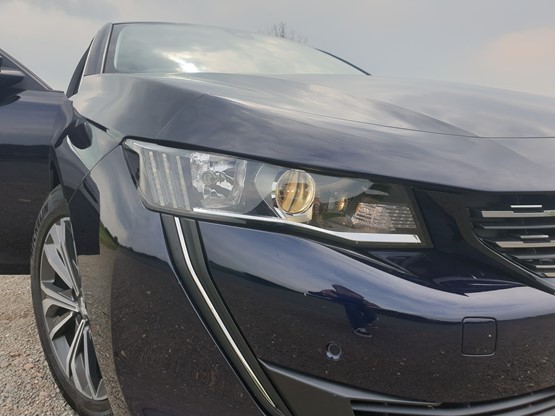 The 508 has clocked up hundreds of miles on a mix of roads on test, culminating in a round trip from Peterborough to Powys as it was put through its final paces.

The 1.5-litre BlueHDi unit on our test car travelled effortlessly along the West Midlands motorways, while the light steering made it feel equally at home on the winding country roads in the mid-Wales valleys.

The 508 has sold well in its first full year, with 1,465 fleet registrations to the end of October.

Registrations will get a further fillip next year with the addition of a plug-in hybrid version.

The vast majority of registrations – 1,788 of the total 2,212 sold (fleet and private) – are automatic. Our six-speed manual test car is very much in the minority, although it is a pleasant enough gearbox.

Overall, there’s a lot to like in the 508, both in terms of design and performance. My only quibble, visibility out the rear is a little restricted and thick front pillars make forward and side visibility a little difficult as well.

The fastback appearance of the Peugeot 508 provides bags of kerbside appeal, but it comes at a price when you climb inside.

Rear passenger headroom is curtailed by its coupé-like roofline, making it difficult to squeeze in if you’re 6ft-plus.

Upfront you don’t feel so constrained, despite the imposing dash, but rivals such as the Volkswagen Arteon and Kia Stinger are more generous, especially when it comes to rear passenger head- and leg-room.

In terms of the boot, the 508 again struggles against other cars in its class. It offers a 487-litre capacity when the rear seats are raised; fold them down and it increases to 1,537 litres. 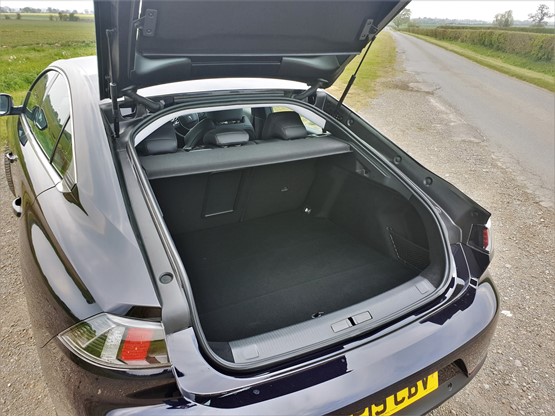 That is comparable to the Vauxhall Insignia (490 litres), but doesn’t look too good against the Ford Mondeo’s 550 litres or the 563 litres offered by the Arteon.

The estate version, the 508 SW, while offering a larger carrying capacity, doesn’t fare much better. It has a luggage area of 530 litres, which increases to 1,780 litres when the seats are lowered.

The 508 hatchback does have some advantages, however. The tailgate opens wide, allowing bulky items to be more easily loaded.

In fact, it opens so wide, if you are on the short side, the electronic boot opening would be a worthwhile option.

There is a lot to like about the second-generation Peugeot 508, especially the fact it bears no resemblance to its unadventurous predecessor.

This latest iteration is unmistakably French, with eye-catching design features making it stand out from the crowd.

Rear leg- and head-room is adequate, but you will find roomier examples in this class, while the front seats are also not the most comfortable on those longer journeys. 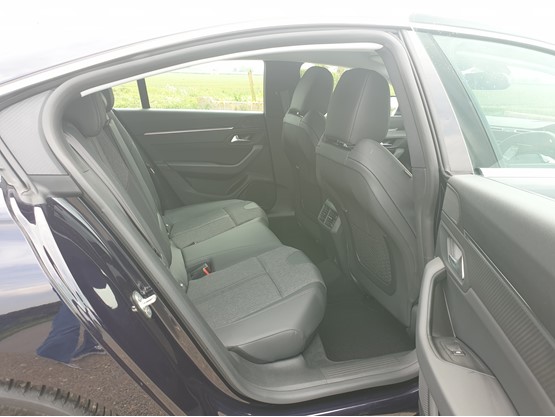 What has been impressive, however, is the performance of the 1.5 diesel engine, with emissions of 101g/km, which powers our test car.

Ok, it isn’t going to push you back into your seat as you accelerate away, but its 130PS gives enough power on motorway driving.

There are three diesel engines, starting with the 1.5-litre BlueHDi unit offering 130PS, and two petrol engines. A plug-in hybrid is due soon.

The 1.5-litre BlueHDi unit is the only diesel engine available with a choice of six-speed manual or eight-speed EAT8 automatic gearboxes. All the others come with an automatic gearbox as standard.

The two petrol engines are both 1.6-litre turbocharged PureTech units – the PureTech 180 and the top of the range PureTech 225.

In our previous test we praised the 508’s extensive range of safety systems, many of which are standard on our Allure trim (which sits just above the entry-level Active), including electronic brake force distribution, emergency brake assist (EBA), which increases braking pressure in an emergency, and electronic stability control, which reduces the risk of skidding through loss of traction.

The one system that is a little too meddling for my liking is the lane-keeping assist. Any slight deviation from the centre of the lane seems to result in a firm tug at the wheel. The system defaults to ‘on’ for every start up, but thankfully is easily switched off by a button to the right of the steering wheel.

Of much greater value is the lane departure warning. Due to the 508’s sloping roofline, the interior lining hides the corners of the rear windscreen, resulting in a wide blind spot around the C pillar that is near impossible to completely eliminate by adjusting the wing mirrors. 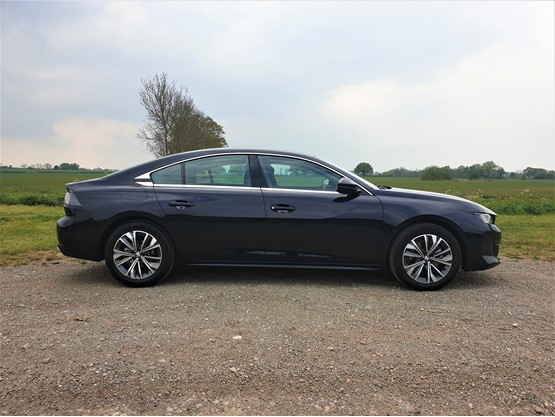 The warning system acts as a second safety net (the first being a quick look over the shoulder before changing lanes) and certainly compensates for the poor rear vision.

Related to safety are the seats. In a previous test, I mentioned that they were supportive. It seems that view is not universally endorsed. Several front seat passengers of late have struggled to find the comfy spot, and have complained of backache on longer journeys.

Both front seats have multi-way electric adjustment, including lumbar support, although I have found that it doesn’t quite nestle snuggly against the spine.

We have encountered our first defect. The windscreen washer has run dry but there was no early warning from the car. Fortunately, the windscreen was fairly clean when I noticed, so the vessel has been refilled with washer fluid without causing any blurry vision while driving.

Peugeot has been keen to promote the significant step-up in quality on the 508 so we’ll keep an eye on this to see whether it is a temporary gremlin or a sign of things to come.

The 508 enjoys a decent level of specification, particularly safety equipment, and has accordingly been given a five-star EuroNCAP rating.

As standard on our Allure trim (which sits just above the entry-level Active) are cruise control with speed limiter, ABS, electronic brake force distribution (EBD), emergency brake assist (EBA), which increases braking pressure in an emergency, and electronic stability control, which reduces the risk of skidding through loss of traction.

I’ve found the auto emergency braking alert a little jittery when approaching cars that are turning into side roads, even when a long gap is left in anticipation of the car’s exit from the main road. However, unlike other models we’ve reviewed, it hasn’t actually applied the brakes.

And we praise the fact that it is able to recognise vulnerable road users, such as pedestrians and cyclists.

In the main, the systems are not intrusive – although I’ve not needed to test most of them. However, EuroNCAP has, and its tests have shown them all to perform well, making the 508 one of the safest cars in its class.

There has been a noticeable change of pace since I swapped into the Peugeot 508.

In truth, the performance is reasonable, with sub-10 second 0-62mph and decent in-gear oomph, but eking out those last drops of power isn’t a comfortable experience. The engine is far happier with a mid-rev gear change rather than being pushed close to the limit.

Does that matter? Probably not. It’s only on odd occasions where you need a bit more urgency, such as overtaking.

At most other times, this is real-life everyday driving and, when keeping the revs low, the Peugeot provides a refined, quiet drive.

It’s also an efficient one. Average fuel consumption has crept up to 55mpg with minimum fuss, and 60mpg is within sight on longer journeys. That compares favourably to the WLTP range of 52.5-59.8mpg.

I’m impressed with the 508’s interior. The small, flat top/bottom steering wheel is enjoyable to handle while Peugeot has made good use of the chrome detailing around the slim-line air vents and consoles. 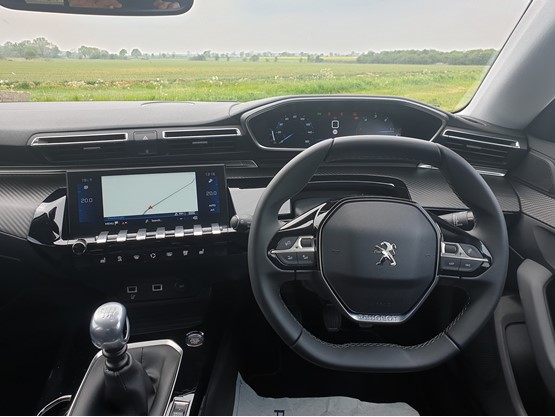 The most eye-catching feature is the innovative and stylish piano keys, which replace the standard buttons. Laid out in front of the 10-inch sat-nav screen, they look great and are extremely easy to use – full marks to Peugeot for creating something that offers both form and function.

The seats are welcoming and supportive and cabin space is excellent for front and rear passengers, despite the swooping coupe-like fastback roofline.

Boot space is acceptable at 487 litres, albeit a little way off the likes of the Ford Mondeo (541) and Volkswagen Passat (586), but on a par with the Vauxhall Insignia (490 litres). However, the boot itself is very heavy to lift and awkward to close.

So far, it’s the only negative when it comes to the car’s practicalities.

It’s the looks that strike you first. The narrow headlights set back from the bumper and bonnet, bookending an equally shallow grille, give the car a menacing glare, while the swooping roofline lends a hint of coupe to this five-door hatchback.

Our new long-term Peugeot 508 has earned admiring glances from staff and acquaintances alike. Won over by its looks, they all ask the same question: “what’s it like?”

It’s been a few years since a Peugeot has attracted such interest. And, initial reactions to the question are ‘it’s pretty good’.

Our test car is the lower trim Allure (which sits just above the entry level Active) with the 1.5-litre Blue HDI 130PS engine. 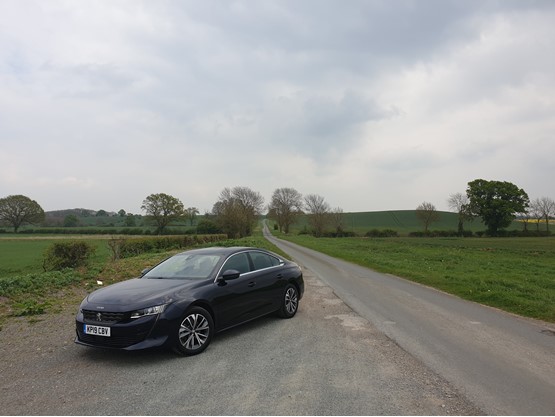 Peugeot has put a lot of emphasis on its competitive total cost of ownership. Running cost over four years/80,000 miles is 35.39p per mile compared to 39ppm for the nearest VW Passat (1.6 auto) and 37.93ppm for the equivalent Vauxhall Insignia (1.6 man).

While the correlated NEDC figure is 74.3mpg, the WLTP range is 52.5-59.8mpg. We’re getting low 50s on commute and high 50s on longer journeys with minimal effort.

The 508 has the looks and the figures certainly add up; over the next six months we’ll find out if the car lives up to this early promise.