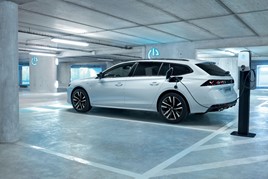 Peugeot has confirmed the new 508 Hybrid will have low CO2 emissions from just 29g/km and a zero-emission range of up to 33 miles.

The new powertrain will be offered on the 508 Fastback and the 508 SW.

It combines a 1.6-litre petrol engine with an electric motor to deliver 225PS, with the ability to return a combined 217mpg.

Peugeot says both models attract a BIK rating of only 10% from April 2020, making them ideal for company car drivers.

The car uses an 11.9kWh battery back, which can be recharged in less than two hours when using a 7kW charger.

Through clever engineering of the battery pack, Peugeot has achieved zero compromise in boot space or versatility compared to conventional 508 and 508 SW models. The all-new 508 HYBRID comes with 487-litres of boot space, with the 508 SW HYBRID providing 530-litres of load capacity.

When the new models go on sale later in the year, three trims will be available: Allure, GT Line and GT.

Peugeot will also offer the powertrain in the 3008, along with a twin motor all-wheel-drive version known as the Hybrid4.

We're currently testing the Peugeot 508 on our long-term fleet. To read about our experiences, click here.

Peugeot has confirmed the UK pricing and specification for the new 208 range, which will be available from £16,250.