Volkswagen has outlined a new mobile charging robot concept that can be deployed in car parks to charge electric vehicles (EVs) in any space.

It aims to resolve the issue of having EV only parking spaces; which can be blocked by people charging for long periods or by non-electric cars that can’t find anywhere else to park.
From opening the charging socket flap to connecting the plug to decoupling – the entire charging process occurs without any human interaction. 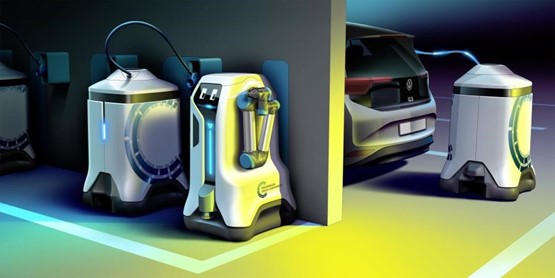 "The mobile charging robot will spark a revolution when it comes to charging in different parking facilities, such as multistorey car parks, parking spaces and underground car parks because we bring the charging infrastructure to the car and not the other way around. With this, we are making almost every car park electric, without any complex individual infrastructural measures”, said Mark Möller, head of development at Volkswagen Group Components.

The company is researching different approaches to the assembly of charging infrastructure and has already developed several products. The flexible quick charging station and DC wall boxes are already part of a future charging family.
Möller says the concept could be made into a reality quite quickly.

The robot, which can drive autonomously, is fitted with cameras, laser scanners and ultrasonic sensors. The combination of these systems not only allows the robot to carry out the charging process completely autonomously but also to move around freely in the parking area, to recognise possible obstacles and to react to them.

The prototype consists of a compact, self-driving robot as well as flexible and agile energy storage devices, also known as battery wagons. When fully charged, these are equipped with an energy content of around 25kWh each. A charging robot can move several battery wagons at the same time. With its integrated charging electronics, the energy storage device allows for DC quick charging with up to 50kW on the vehicle.

An increasing demand from EV drivers for more powerful chargers is among a range of findings from the Zap-Map EV Charging Survey.