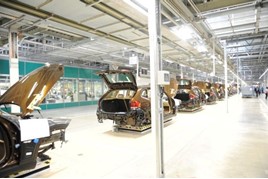 Car and van production at some of the UK’s largest vehicle plants is expected to resume by the end of the week, following revised lockdown measures announced by the UK Government.

From Wednesday (May 13), the Prime Minister Boris Johnson said all workers who cannot work from home should travel to work if their workplace is open.

Sectors of the economy that are allowed to be open should be open, he said, this includes food production, construction, manufacturing, logistics, distribution and scientific research in laboratories.

Car dealerships are expected to re-open on June 1, prompting car brands to restart production in order to meet demand for new vehicles.

BMW’s Swindon plant is due to open tomorrow (May 15), while Mini Plant Oxford will resume activities on Monday (May 18).

Rob East, the brand’s corporate sales manager, said: “BMW Group have taken the decision to adopt a staggered approach to ramping up its production locations. A number of facilities have returned to operational status already and the remaining vehicle plants are scheduled to resume production by the middle of May, depending on market conditions.

“This will be a managed ramp up and plants will not be at 100% capacity from re-opening. Initially, facilities will be operating a one shift pattern rather than the standard two shift pattern.”

Together with Valencia Engine Plant in Spain, which also restarts production next week, the resumption of production at Dagenham and Bridgend means that all of Ford’s European manufacturing facilities will be back at work.

“As we return to work at our two engine plants in the UK, our key priority is the implementation of Ford’s global standards on social distancing and strengthened health and safety protocols to safeguard the well-being of our workforce,” said Graham Hoare, chairman, Ford of Britain.

Ford will continue to build ventilator sub-assemblies for the VentilatorChallengeUK Consortium which is supplying the National Health Service with the much-needed units. The facility used in the assembly of the ventilators is separate from the main engine plant buildings at Dagenham and has no impact on engine production.

Ford also is producing face masks for its U.K. employees and those across its facilities in Europe.

PSA Group will also restart production on May 18 at the Vauxhall commercial vehicle facility in Luton. The group has been slowly resuming activity since May 5 across Europe.

Preparations to open Ellesmere Port are underway, but a date has not yet been confirmed.

Coronavirus: Audi to restart car production by end of April

Audi will restart car production at its plants in Europe during the coming weeks, with ‘normality’ expected by the end of the month.

HMRC has issued official guidance to fleets on how to treat benefit-in-kind (BIK) tax and expenses during the Covid-19 pandemic.