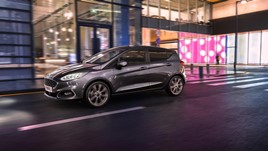 Ford as improved the efficiency of its best-selling Fiesta model, with the addition of new mild-hybrid powertrains.

The EcoBoost Hybrid engines, which debuted in the new Puma, are now offered in the Fiesta with 125PS or 155PS.

Ford EcoBoost Hybrid powertrains are available from £19,860 with Fiesta Titanium. They feature a belt-driven integrated starter/generator (BISG) in place of the standard alternator, enabling recovery and storage of energy usually lost during braking and coasting to charge a 48-volt lithium-ion air-cooled battery pack.

The BISG also acts as a motor, integrating with the engine and using the stored energy to provide torque assistance during normal driving and acceleration, as well as running the vehicle’s electrical ancillaries.

Alongside the new powertrains, Ford has added driver assistance technologies including Adaptive Cruise Control with Stop & Go and Speed Sign Recognition, designed to deliver less stressful driving experiences on highways and around town.

The Fiesta is now better connected, too, following the introduction of a standard FordPass Connect modem, enabling a range of functions via the FordPass mobile app.

Its steering is sharp and the ride composed which, together with its practicality and efficiency, makes the Puma an excellent all-rounder.