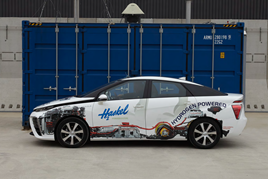 With a range of 300 miles, the Mirai will help Haskel reduce its environmental footprint, while raising the visibility of hydrogen-powered cars.

Darran Heath, Haskel’s global general manager Hydrogen Systems, said: “We’re really excited about having the Mirai on our fleet. We’ll be using the car to support the demonstration and development of our hydrogen refuelling systems, as well as provide emission-free business travel for the company.”

The Toyota Mirai is powered by electricity generated on-board by a fuel cell stack through the process of combining hydrogen with oxygen. It has near-silent running and produces no emissions other than pure water.

Many UK organisations, particularly those with hard to decarbonise and demanding transport requirements, ranging from private hire operators, to museums and universities, police forces, public bodies and private companies, have adopted the Mirai and covered millions of miles of emission-free driving.

Fuel cell vehicles have been overshadowed by battery electric cars in the race to zero emissions. But they shouldn’t be overlooked.