Fleet and business registrations slipped by 8.9%, while private sales were down by 1.9%.

The fleet industry still accounted for a larger share of August’s new car sales though, with a market share of 54.4%.

A total of 87,226 new cars were registered in the month, around half the number registered in July. August is a traditionally slow month for new registrations ahead of the September plate change, however. 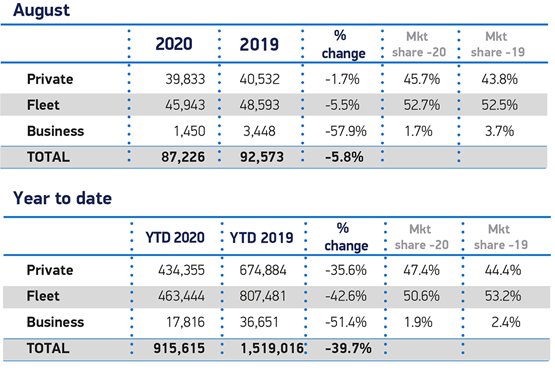 Mike Hawes, SMMT chief executive, said: “The decline is disappointing, following some brief optimism in July. However, given August is typically one the new car market’s quietest months, it’s important not to draw too many conclusions from these figures alone.

“With the all-important plate change month just around the corner, September is likely to provide a better barometer. As the nation takes steps to return to normality, protecting consumer confidence will be critical to driving a recovery.”

The shift towards electrified cars continued in August, with growth in all segments. 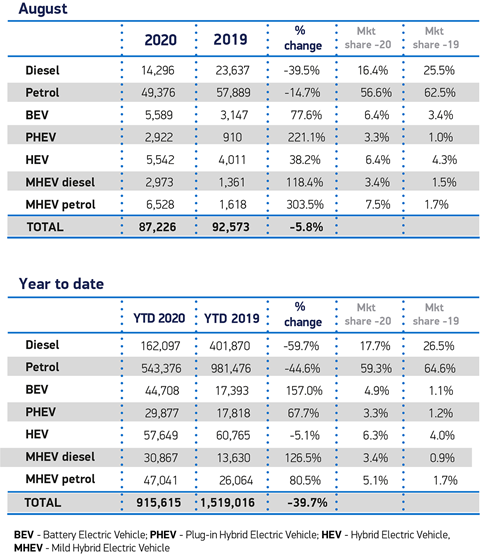 Diesel sales declined by 39.5%, leaving the fuel with a market share of just 16.5%. Petrol, meanwhile, still dominates registrations, powering more than half of the cars sold in August.

Mild hybrid petrol engines were the most popular alternative powertrain choice in August, overtaking hybrids with more than 6,500 registrations.

Sales of plug-in hybrids increased by 221.1%, although they still only accounted for one in 30 sales.

Registrations of battery electric cars (BEVs) increased by 77.6% in the month, accounting for 6.4%. However, BEVs make up just 4.9% of registrations year to date.

Jon Lawes, managing director of Hitachi Capital Vehicle Solutions, said: “The decrease in car registrations published today shouldn’t cause alarm. The drop could indicate the rise last month was from supressed demand forced by lockdown as the industry began to slowly re-open.

“However, the relatively small drop in fleet registrations of -5.5% in the face of a pandemic and difficult economic circumstances continues to show the resilience of the industry and should be a welcome relief to manufacturers.

“Demand for electric vehicles continues to be a bright spot, with battery electric vehicles increasing by 77%. But there are still cost and charging infrastructure concerns that we need to address to reach 2030 government targets, as the SMMT has called for today.

“August is also typically a quieter month and with new 70 plates causing excitement for September, next month’s figures could provide a real indicator on the health of the industry.”

The Ford Fiesta (pictured) remained the best-selling car in August followed by the VW Golf, which is regaining momentum following the introduction of an all new model earlier in the year.

Ford new Kuga and Puma SUVs have also achieved a position in the top-10 best sellers list, following their introduction this summer.

Michael Woodward, UK automotive lead at Deloitte, said: “Monthly new car sales are almost back to pre-pandemic levels and there is hope that September, a key month for new car sales, will be a bumper month for the industry as consumers take advantage of enticing discounts to secure a new 70 plate. However, according to our latest research, nearly half of consumers are planning to keep their current vehicle for longer than planned meaning that once pent up demand is met, sales may subsequently drop off.

“Demand over the course of the year will also likely be affected by consumers’ financial situations. Should unemployment rates continue to rise, new car sales could stall. However, with many consumers looking for a public transport alternative, demand for cheaper models could fuel the used car market."