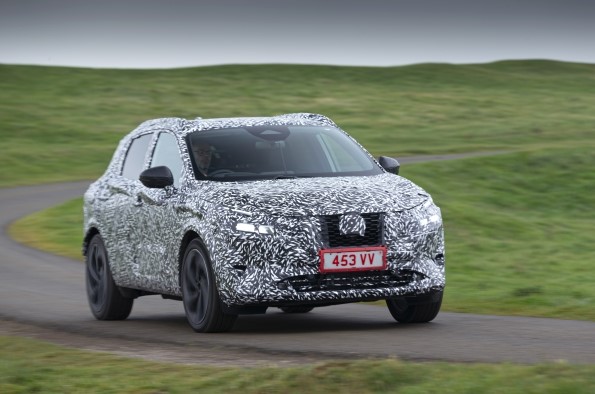 Nissan has released pictures of a disguised new Qashqai compact SUV ahead of its launch in 2021.

The current Qashqai, which went on sale in 2014, has sold more than one million units since its introduction.

The new Qashqai will be the first new model to use the CMF-C platform and will offer customers two powertrain solutions – a 1.3-litre petrol engine with mild hybrid technology, and the manufacturer’s e-Power electric motor driven system.

In e-Power, a petrol engine is used but it will not drive the wheels: instead, it simply charges the battery.

Nissan says the engine-driven generator maintains the battery charge, but can also provide electricity directly to the motor for additional power.

The engine operates at an optimal RPM range promoting maximum fuel efficiency while being carefully tuned to minimise noise and provide a natural, connected feel during hard acceleration.

Gianluca de Ficchy, chairman, Nissan Africa, Middle East, India, Europe and Oceania (AMIEO) Region, said: “With Nissan’s bold e-Power technology, we feel that customers will fall in love with the feeling of an electric powertrain, without the range concerns.”

The new Qashqai will also be equipped with the next generation of ProPilot driver assistance technologies, called ProPilot with Navi-link.

The updated adaptive cruise control is now able to adapt the car’s speed according to additional external circumstances: when the car crosses to a lower speed limit zone on the highway, the system is able to read road signs and take into account navigation system speed limit data to slow the Qashqai to the appropriate speed, meaning the driver doesn’t need to adjust the cruise control speed manually.

The system can also use data from the navigation system to adjust the speed for approaching curves or exit ramps that have a tighter radius.

ProPilot with Navi-link can now communicate with the Qashqai’s blind-spot radars to help intervene with a steering input correction to help prevent a lane-change manoeuvre if there is a vehicle in the blind-spot zone.

Nissan has agreed two new supply partnerships to support and expand its services to fleet customers.

Nissan has created a new Leaf-based concept to showcase the capabilities of an electric vehicle (EV) to provide power in the event of a natural disaster or extreme weather.

Nissan is working as part of a new consortium to help develop a blueprint that will help cities across the UK introduce autonomous vehicle.