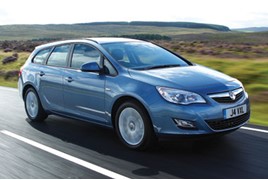 Vauxhall is the latest manufacturer to face claims that some of its diesel engines were fitted with emissions ‘cheating’ devices or software.

It follows similar accusations against Mercedes-Benz, Fiat-Chrysler and the Renault-Nissan alliance, in the wake of the Volkswagen 'dieselgate' scandal.

Law firm Milberg London says it is launching a case against Vauxhall for drivers who bought or leased certain models manufactured between 2009 and 2019.

A statement issued by the car maker said: “Vauxhall Motors is not aware of any such claim and rejects any accusation of using illegal defeat devices. Our vehicles meet the applicable regulations.”

More than a million people could receive compensation if the claim is successful.

Edward Cardington, partner at Milberg London LLP and lead lawyer for the Vauxhall Pay Up Campaign, said: “The Vauxhall Pay Up campaign has set out to prove that Vauxhall cheated both the emissions tests and hardworking British drivers.

“Motorists were promised a combination of low environmental impact and high driving performance that appears to have been impossible in real driving conditions. Put simply, clean diesel looks like a myth and Vauxhall’s cars did not provide the performance drivers paid for.”

The Vauxhall Pay Up campaign will claim under the Consumer Protection from Unfair Trading regulations. These laws state that customers who were sold products with misleading information could receive anything between 25% and 75% of the cost of the product they purchased in compensation.

A High Court judge has concluded that the Volkswagen Group did install illegal emissions defeat devices to its cars, ruling in favour of a class action.

Law firm PGMBM is preparing a group legal claim on behalf of owners of some Mercedes vehicles, over claims customers were misled about the emissions their vehicles produced.

Fiat Chrysler Automobiles (FCA) is the latest manufacturer to face an emissions-based legal battle in the UK, as law firm PGMBM claims the manufacturer misled customers through the use of emissions 'defeat' devices.