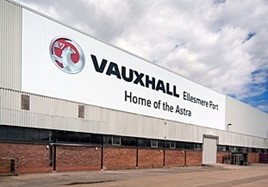 Vauxhall’s Ellesmere Port plant faces a risk of closure as parent company Stellantis weighs up its options in light of the Government’s decision to end the sale of new petrol and diesel cars by 2030.

It is reported that there are three options available to the car maker: continue production of ICE vehicles in the short-term, close the plant completely or make a commitment to produce a new generation of electric vehicles at the factory.

According to the BBC, the business secretary has met the management of Stellantis three times in the last six months to try and secure the plant’s future.

Carlos Tavares, head of Stellantis, warned that the plant was at risk of closure in January. He had previously hinted that Ellemere Port would be given a new lease of life to produce the next-generation Astra from 2022 but that decision was impacted by the Government’s 2030 announcement.

The factory, which produces the current Vauxhall Astra, employs 1,000 people.

Ellesmere Port’s ability to build electric cars is hinged on the availability of UK-based battery production, which is currently only viable using a plant in the North East that works exclusively with Nissan.

While batteries could be imported from the EU under the Brexit trade deal, the logistics are uneconomical and hindered by restrictions that prevent batteries from being transported via the Channel Tunnel.

A Government spokesperson said:   “We are committed to ensuring the UK continues to be one of the best locations in the world for automotive manufacturing, and we’re doing all we can to protect and create jobs, while securing a competitive future for the sector. We regularly speak with all automotive companies, including Stellantis but do not comment on ongoing discussions.”

The Government says it is investing millions to expand the UK’s supply chain for cleaner vehicles, while working with the auto industry to ensure it remains competitive. It also has a programme of support for the UK automotive sector and is investing in R&D and capital projects to develop and embed the next generation of zero emission vehicles and technologies in the UK. As part of the Prime Minister’s Ten Point Plan, the Government recently announced £500 million – as part of a wider commitment of up to £1 billion – to support the electrification of UK vehicles and their supply chains, including developing Gigafactories in the UK.

An announcement on the future of Ellesmere Port is expected later today.

Vauxhall's Ellesmere Port plant could be closed if the UK's exit from the EU makes it unprofitable, warned Groupe PSA boss Carlos Tavares.