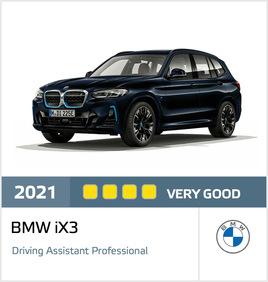 Thatcham Research and Euro NCAP have released the results of their latest assisted driving results, with the BMW iX3 rated top out of the cars tested.

Seven new cars were assessed during the latest tests, with five of them pure electric vehicles (EVs), reflecting the increasing popularity of this type of vehicle within the new car market.

Each car was evaluated and rated for the level of assistance, level of driver engagement and effectiveness of the safety back-up offered by their assisted driving systems.

The best systems strike a good balance between the amount of assistance provided and how much they do to ensure drivers are engaged and aware of their responsibilities behind the wheel, according to Thatcham Research.

Matthew Avery, Thatcham Research’s chief strategic research officer, said: “Assisted driving technology can be a great comfort feature, especially when supporting drivers on long motorway journeys. But it must strike the right balance between offering a meaningful level of assistance and ensuring that motorists don’t sit back and let the system do the driving.

“We’ve seen the dangerous outcomes on roads around the world when drivers become convinced that their role is secondary.”

The naming, marketing and performance of Tesla’s ‘Autopilot’ system was highlighted as a concern.

However, the capabilities of cars in this year’s assessments have been described correctly and consumers are not being led to believe they are driving a car equipped with automated functionality.

“These systems are engineered to involve and support the driver in a very cooperative manner.

“They’re certainly not trying to offer automation, where the driving task can be relinquished to the vehicle, and we strongly believe that’s the right thing to do.”

BMW’s iX3 emerged as the top performer, scoring 169 points (out of a possible 200) and earning a ‘very good’ grading, while the Ford Mustang Mach-E (152 points) and Cupra Formentor (144 points) both secured a ‘good’ grading.

The all-electric Polestar 2 (135 points) and Hyundai Ioniq 5 (126 points) earned a ‘moderate’ grading, while the less expensive Toyota Yaris (109 points) and Vauxhall Mokka-e (101 points) were both handed an ‘entry’ grading for the solid core performance of their Assisted Driving technology.

Avery said: “These encouraging results reveal solid system performance across a good spread of new vehicles, and the fact that five of the seven cars are full EVs is also positive.

“It shows the newest cars in this growing sector are being equipped with Assisted Driving technology that delivers comfort and safety benefits to drivers.”

On the BMW iX3, Avery added: “It's the only vehicle to get our 'very good' grading. It responded well in our collision avoidance scenarios and at 85%, it has one of the highest scores for driver engagement, in part because the iX3 features good in-vehicle video to show the driver how to use the system.”

Toyota's Yaris, meanwhile, gets an 'entry' rating, but Avery says it's impressive to see assisted driving functionality on a low-cost super mini.

However, he said: “It's let down by its comparatively poor performing vehicle assistance and safety back-up functions.”

At the heart of an effective assisted driving system should always be a good balance between driver engagement, vehicle assistance and safety back-up.

Thatcham Research believes the results of its latest assisted driving grading assessments as a positive step along the road to automation, however, the ‘moderate’ rating achieved by the Polestar 2 shows that this technology is still in its early stages.

The Polestar 2 achieved an impressive 85% for safety back-up and a solid 70% for driver engagement, but it was the lowest scorer – at 50% – of all the cars tested for vehicle assistance.

Its speed assistance function, in particular, was highlighted as an area that needs improvement by test engineers. “The Polestar 2 is really impressive in an emergency, almost equal to the BMW in terms of its safety back-up score. But its assistance score holds it back overall,” said Avery. “Finding that sweet spot in terms of system balance is a challenge that carmakers continue to face.”

Although its current assessments focus on testing today’s assisted driving technology, Thatcham Research and Zenzic are working in partnership on a safety rating scheme for automated driving systems.

The intention is that this will become the benchmark for a global independent rating scheme for automated driving systems, with a view to driving best practice and reassuring consumers that - when the technology is mature enough - it’s safe to hand over control.

New rules to ensure marketing of automated vehicles is clear

The latest assisted driving gradings have been published just as a new set of guiding principles for marketing automated vehicles has been published by the Society of Motor Manufacturers and Traders (SMMT).

The principles, which have been developed and agreed by the Centre for Connected and Autonomous Vehicles’ AV-DRiVE Group, provide an outline for responsible advertising and communication relating to automated vehicles and their capabilities.

The industry-led initiative will ensure consumers receive consistent and clear information regarding automated driving features, ahead of their expected introduction to British roads in 2022, says the SMMT. 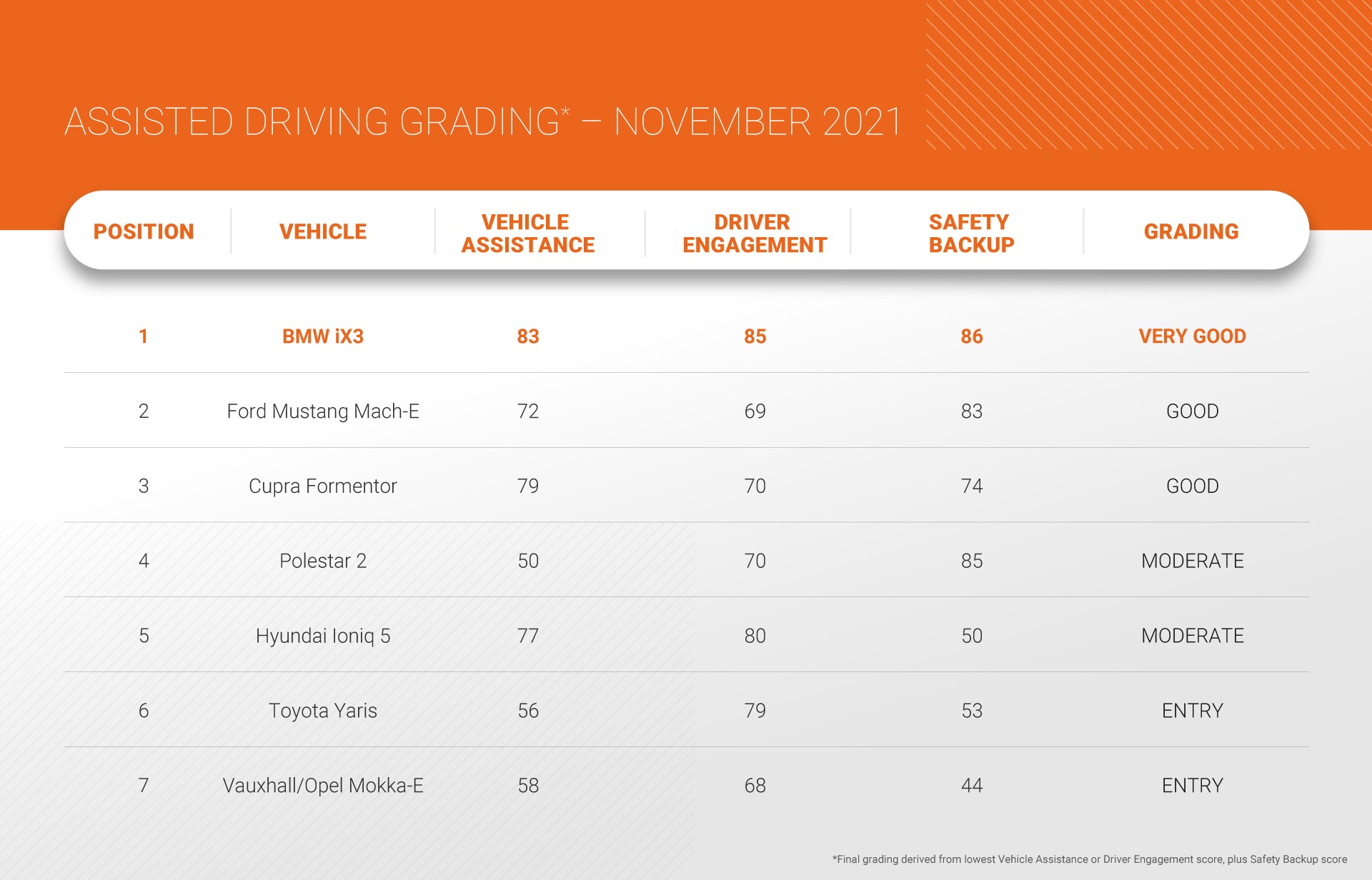 Thatcham Research has continued its plans to improve road safety through the promotion of properly functioning ADAS on vehicles, with the launch of a new repair course.