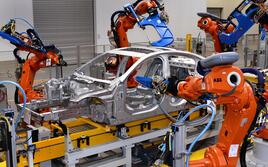 Toyota has closed all of its 14 factories in Japan today (Tuesday, March 1) after a possible cyber-attack.

Supplier Kojima Industries Corporation suspects it was hit by a cyber-attack, causing the halt in production, reports news site Nikkei.

A statement from Toyota said: “Due to a system failure at a domestic supplier, we suspended our operations on all 28 lines at 14 domestic plants in Japan today, Tuesday, March 1.”

However, it says that it aims to resume all operations from the first shift tomorrow, (Wednesday, March 2).

It added: “We would like to apologise again to our customers, suppliers, and other related parties for any inconvenience caused by today's sudden shutdown.

“Working together with our suppliers, we will make every effort to deliver vehicles to our customers as soon as possible.”

Jaguar Land Rover (JLR), meanwhile, says it is pausing the delivery of its cars to Russia due to "trading challenges".

It is thought sanctions imposed by the UK, the EU and the US are making it difficult for JLR to sell cars in Russia.

The manufacturer, which sold 6,900 vehicles to Russia last year, did not give further details, reports the BBC.

A JLR spokesperson said in a statement: “The current global context also presents us with trading challenges, so we are pausing the delivery of vehicles into the Russian market and continually monitoring the situation on behalf of our global customer base.”

Volvo has also said it would stop delivering cars to Russia until further notice.

Toyota and Lexus has revealed 15 new electric vehicles (EVs) as part of its strategy to offer 30 battery-powered models by 2030.

Fears of even higher fuel prices after Russia invades Ukraine

Fleets are being warned to expect fuel prices to continue rising after Russia invaded Ukraine sending the price of a barrel of oil soaring past $100 (£74).