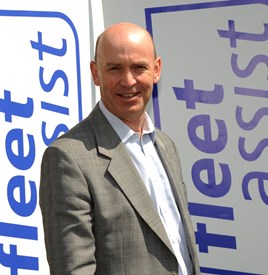 The boss of Fleet Assist, Simon English, is cycling solo more than 1,900 miles through four countries with the aim of raising thousands of pounds for Cancer Research UK.

The joint managing director of Cambridgeshire-headquartered Fleet Assist is now almost more than a week into a six-week cycle ride from his Hertfordshire home to Brindisi at the foot of Italy.

Billed as “Simon’s mid-life crisis”, English explained: “Some years ago I decided I finally had to do the big thing I’d always wanted to do - and do it before I am too old.

“I can’t run because of four knee operations and five different torn knee ligaments, I can’t swim again because of the knees - so it had to be a bike ride.”

Having never cycled more than 60 miles in a week, English says he is taking the scenic route and going over the Alps on his bicycle, dubbed Benson - his “trusty gentleman’s companion” - and sleeping mostly in a tent as he looks to average 50 miles a day with the odd rest day.

He hopes to compete his epic journey by the end of the first week of October and is also planning sight-seeing en-route from England through France, Switzerland and Italy.

He said: “I’m not picking a hard and fast route and certainly don’t want to be tied down to stopping somewhere just because I had planned to - or likewise grinding on in the wind and rain. This is meant to be challenge but not a torture.”

English co-founded Fleet Assist more than a decade ago. The company has business partnerships with a significant number of the UK’s leading contract hire and leasing companies collectively operating some 700,000 vehicles.

It provides clients with a nationwide network of more than 7,000 service outlets which undertake service, maintenance and repair work on vehicles supplied to customers across the UK.

English set an initial fundraising target of £10,000 and less than two weeks into the trip more than £7,300 has been donated by generous sponsors.

To sponsor him, go to www.justgiving.com/Simon-English6/ and follow his epic journey through his daily updates at www.englishfamily.me.uk/.