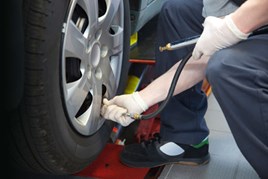 A new survey has shown many motorists don’t know how to perform basic car maintenance tasks such as checking oil and tyre pressures.

The survey of 1000 motorists, conducted by JCT600, looked at car-owners’ car maintenance knowledge and habits ahead of Car Safety Week.

Comparing responses based on age revealed that 18-24 year-olds are the least likely age group to know their recommended tyre pressure (30%).

Comparing based on gender showed that men get their cars serviced more often than women on average (every 1.36 years vs every 1.47 years) but check their tyre pressure less often (every 5.14 years vs every 4.56 years).

Andy Bateman, head of operations at JCT600, said: “Discovering that more than 6 in 10 motorists don’t know what their brake warning light means, and that a quarter don’t know how to check their oil level, was a surprise, to say the least. The fact that nearly half don’t know how to check their tyre tread depth was perhaps a little less of a shock, but with access to better information, these are all simple tasks for anyone who owns a car.

"As we look ahead to the coming year, there’s no better time than now for car-owners to get clued up on car maintenance and safety.

"Now, with Car Safety Week underway, I’d encourage drivers to be prepared for winter driving conditions, and to get to know their cars as well as they can, so they can look after them properly.”