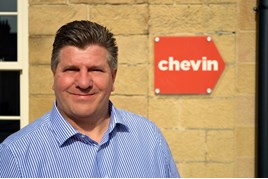 Chevin Fleet Solutions has announced the appointment of a new global sales director to drive its continued worldwide growth.

David Gladding, formerly Chevin’s UK sales director, has been awarded the new role, which will see him work to co-ordinate Chevin sales operations in all territories, further grow the company’s sales teams and maintain its successes locally, regionally and globally.

The company has created the role of global sales and marketing director after a hugely successful year in which it achieved record revenue growth (+57% in 2016). During the past twelve months it has undertaken the largest recruitment drive in its 26-year history to help meet growing customer demand, streamline its management processes and continue its growth trajectory.

Chevin’s software is currently used by companies in more than 180 countries around the world to manage more than one million vehicles and assets and its team works from offices in the UK, US, Belgium, Australia, France and Germany.

Chevin has also signed a partnership with Jordan-based Pioneer Consult, to facilitate increased sales of its enterprise-level fleet and asset management software, FleetWave, across the Middle East.

Speaking about the appointment, Chevin managing director Ashley Sowerby said: “David is a central member of the Chevin team with an unparalleled understanding of the global fleet management industry.

“Starting with us back in 2013, he has worked tirelessly to help increase revenue, deliver improvements in customer account management and overall help Chevin and its customers achieve many goals and improvements across the board.

“David will be transitioning out of his UK dedicated role over the next few months and I look forward to working with him on an ongoing basis.”

David added: “I am very proud to be named as Chevin’s new Global Sales and Marketing Director and very much looking forward to taking this role on.

“Chevin goes from strength to strength in its mission to deliver world-leading, quality fleet management software to the industry.

“I look forward to continuing to work with Chevin’s strong team across the world to move the business forward.”