January did not see the best start to the year in either the new or the used car market with new car registrations starting the year on a further downward trend.

If a drop of 1.6% on the same month last year for the whole market was not disappointing enough, the news that the fleet sector fell by 3.4% was indicative of the concern that is being expressed in every part of the fleet business at the moment.

Business registrations were even worse with a 33.5% decline over the volumes from January 2018.

After a competitive few months in the fleet sector towards the end of 2018, a general economic malaise seems to have really hit home with fleet purchaser.

The question is whether this is driven by any one thing or whether we are just approaching a ‘perfect storm’ of issues and concerns that are building to stifle new sales for the coming months.

There is little doubt that the UK’s complete lack of direction on Brexit is part of the problem.

A government that would appear to be in complete disarray and a prime minister seemingly incapable of gaining any form of credibility with Brussels is not a good way to give confidence to businesses that currently are and would like to continue to do business with and in the UK.

A no deal Brexit is so close that a number of contract hire and leasing companies are now frantically reviewing what plans they have in place should the industry suddenly find it difficult to access the supply of key brands.

There are also signs that certain key manufacturers are trying to stockpile stock in the UK to ensure that in the event that trading and tariffs become a short-term issue there will be some level of new car supply.

One specific issue that is still causing concern is the debate around fuel type.

The diesel scaremongering in the national press is less evident whilst Brexit as a distraction but with new diesel registrations continuing to fall heavily month on month and market share at such a low level the fleet sector is beginning to wonder where this will end.

However, this drop in new diesel registrations is going to present opportunities in a few years because the used car consumer still appreciates the value in used diesel cars.

The chart below shows the development of used car retail pricing over the past two years:-

This chart is interesting because it contradicts the media assumption that diesel cars are bad news.

Over the past two years, ex-fleet diesel car retail prices have improved by three percentage points and during the course of both years, the trend has therefore been upwards.

In fact, the performance of retail diesel pricing during 2018 was been more stable than it was the previous year.

The January 2019 figure of 49% of OCN suggests that retail pricing for this age and mileage will continue to improve.

With data like this giving a true picture of diesel car demand there are some risk departments in large organisations that are beginning to take a different view on where retail pricing may be at the end of the next cycle of diesel fleet vehicles.

Manually edited insight has a subjective level that is proving to be a barrier to being able to do good business now when there are such fluid and exciting used car market conditions real-time data is now essential to be able to understand what is happening on a day-by-day basis.

It therefore gives both risk and remarketing teams the ability to take advantage of nuances in the market that will allow them to maximise on both front-end profit and ROI when the car is de-fleeted.

The health of luxury cars

If the diesel market is interesting now as is the performance in the luxury car sector.

There has been a lot of anecdotal discussion about the long-term future of the traditional luxury car market and more so in the last six months.

Mixed reports of the popularity of high value luxury cars have been prevalent with opinion flicking from a life is healthy message to grave concerns over entrepreneurs and business leaders seeking to reduce outlay and buying a more cost-effective car.

The chart below focusses on some of the key players in the luxury car segment and displays retail pricing performance as a percentage of original cost new over the last 12 months:- 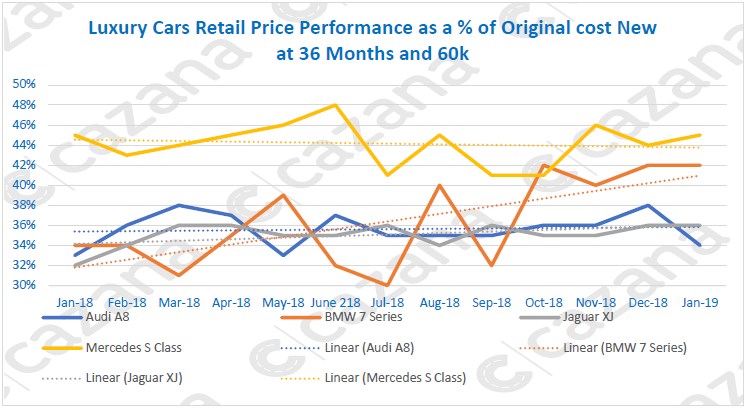 These cars all represent fabulous value for money in the used market and for a consumer seeking luxury and who is not put off by the potential for some big bills should the cars go wrong, then there are opportunities to bag a great value car.

Key considerations looking at this chart are the general stability and similarity in pricing for the Jaguar and the Audi and the latter is perhaps a surprise given that it is most competitive against the BMW in the new market.

The volatility of the pricing performance for the BMW suggests peaks and troughs in supply in the used market and this is often indicative of front-end tactical activity coming home to roost as they defleet end of contract cars into the used market.

The performance of the Mercedes is interesting as in percentage terms it performs significantly better than its competitors although it is worth acknowledging that the average cost new for the sample data was higher than the competitors but not by that much.

As such this may well reflect the demand for the product overall.

In summary, the fleet sector may be about to go through some difficult times from a new registration point of view.

The concerns over diesel as a used proposition seem largely unfounded and the lack of these going forward and the ongoing strength of the used car market will probably present some profit opportunities on the years ahead.

Using real-time data for both risk and remarketing teams will give any business the foundation for greater insight and profit.

With so much media attention on Brexit there has been quite a welcome reduction in diesel coverage in the media.

The used fleet market in December was surprisingly buoyant and perhaps out- performed the expectations of many of the fleet vendors.

by Rupert Pontin, director of valuations at Cazana