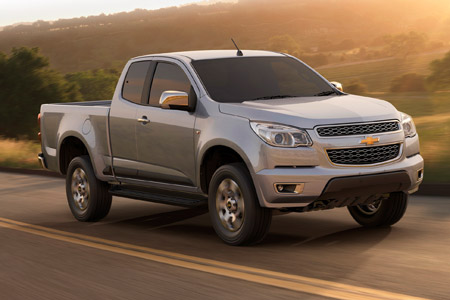 The pick-up market represents new territory for Chevrolet in the UK, yet in global terms it is a huge part of the company’s business. For mid-sized trucks such as the Colorado, Thailand is the world’s biggest market ahead of even the US, which explains its decision to build this at Chevrolet’s factory in Chang Rai.

Visually the pick-up has all the design cues you would expect; an imposing grille, chunky running boards and an all-round sense of toughness, but there is an obvious family link to the more conventional cars in the Chevrolet range.

Higher-specification models have upmarket touches such as LED tail lamps too.

While clearly a big vehicle, the Colorado isn’t too large for the majority of British roads, striking a good balance between carrying capacity and exterior dimensions.

It is the first product to benefit from the new Duramax diesel engines, initially available in 2.5-litre and 2.8-litre forms, also built in Thailand at a new engine plant.

At first glance the dashboard layout looks very car-like, with a smart two-tone finish, an attractive rotary knob for climate control and a relatively small diameter steering wheel. Instruments are attractive rather than utilitarian and the specification is good too.

On close inspection the materials are designed for toughness rather than being soft to the touch, but in practical terms it is well suited to a working life.

The entry-level 2.5-litre Duramax unit avoids any unpleasant clatter starting from cold and the five-speed gearbox offers a relatively short throw change. The 258lb-ft of torque is more than enough to get the Colorado moving briskly, and right through the rev range the engine remains acceptably refined.

Balancing serious load-carrying capacity with on-road comfort is always a challenge for pick-up manufacturers, but the Colorado does a decent job.

As standard it has selectable high-low ratio four-wheel drive which can be shifted on the move, and a simple rotary control negates the need for any extra levers.

It also performs exceptionally well off-road; tackling some unclassified dusty roads was a breeze and it inspires huge confidence.

Chevrolet’s expectations for the Colorado in the UK are relatively modest; full-year sales of 1,000 units is the target and the company is aiming to use the clear links to its conventional road car offerings and the strong worldwide brand image of Chevrolet trucks.

On this evidence the Colorado certainly has potential against more elderly rivals.