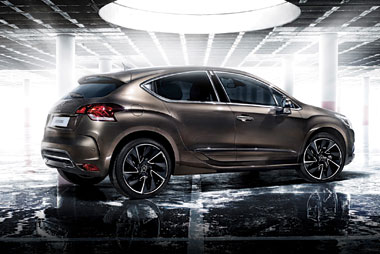 Citroën has enjoyed huge success with the first model in its upmarket DS line, the DS3.

As a rival to cars like the Mini without the baggage of heritage, it has found appeal among retail customers as well as lower-tier user-choosers, not least because of attractive running costs.

But now it gets serious as Citroën tries to make this strategy stick in a key fleet sector.

The DS4 is based around the architecture of the new C4, but stands out from mainstream hatchbacks.

Citroën claims that the DS4 is part-hatchback, part-MPV and part-coupé. It’s said to be versatile enough to steal sales from every corner of the fleet market, so direct rivals are difficult to pin down.

According to Citroën, the DS4’s chief competitor is the Alfa Romeo Giulietta, but it’s also supposed to muscle in on the Volkswagen Scirocco and larger crossovers like the Nissan Qashqai, which is something of a broad spectrum.

Even if you don’t believe the hype, it’s hard to ignore the DS4’s svelte styling.

Its curved rump and its imposing nose cut a dash, while the interior is classy and well built.

The horned dial pod and the big steering wheel are particular highlights.

The rear door handles have been flushed into the corner of the window – not unlike a Seat Leon’s – to give the illusion that the car is a three-door coupé.

Stylish though it may be, the back doors’ sharp edges and the steep angle of the roof hinder access to the rear of the car, and the rear windows don’t roll down, either.

Rear seat passengers would also benefit from a little more room and light. By comparison, those in the front enjoy plenty of space and light, as the windscreen extends back well into the roof line.

Boot space is limited to a reasonable 385 litres with the rear seats upright, but some of that is eaten up by a large subwoofer if you add the optional audio pack.

Not surprisingly, the latter engines are likely to be the more popular choices.

The HDi 163 offers the best blend of smooth performance and economy with 55.4mpg, while the 112 e-HDi is the cleanest of the range courtesy of a micro hybrid system.

It’s no Toyota Prius beater, rather a stop-start system complete with regenerative braking, but that’s enough to cut fuel consumption and emissions by up to 15%, the end result being 114g/km and 64.2mpg.

In a break from typical Citroën tradition, the DS4’s handling is better than its ride.

Despite the car’s jacked-up stance (which would lend itself well to a four-wheel drive variant, but Citroën has dismissed that idea), body roll is minimal and the steering is accurate, though lacking in feedback.

The trade-off is a rough ride on anything other than smooth surfaces.

Regardless of what engine is under the bonnet, the DS4 is exceptionally refined at any speed.

Forward visibility is good, thanks to the high driving position, but it’s hampered in equal measure by large, intrusive A-pillars.

The small rear screen is also difficult to see out of when reversing.

Three equipment grades are on offer – DSign, DStyle and DSport.

Citroën may have billed the DS4 as a car with multi-sector appeal, but it isn’t quite the all-conquering crossover it’s made out to be.

However, with competitive running costs compared to popular crossover cars, and stylish appearance it should have strong appeal for user choosers.

Think of it as a posh hatchback – a more upmarket version of the C4 on which it’s based – and you’re about there.