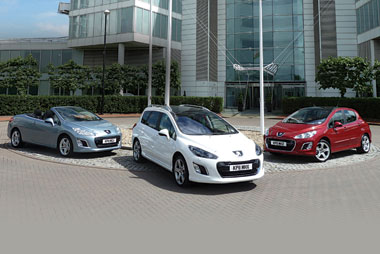 Peugeot has given its 308 a new look as well as focusing on reduced CO2 emissions and making the car as fuel-efficient as possible.

The car is available in three body styles – hatchback, CC and SW, which are being launched together. Last time around, the hatchback launched in September 2007, with the SW following in June 2008 and the CC in June 2009.

The 308 has been a strong seller for Peugeot, with the outgoing model notching up 90,000 sales in the UK since its launch.

Peugeot has repositioned the pricing and says the new 308 is £800 cheaper than the outgoing model.

Looks-wise, the 308 has been given a shorter nose and a smaller grille. The number plate has been moved up to give it a more compact look.

The Peugeot Lion badge at the front of the bonnet is another change. More chrome has been added and LEDs are combined with standard headlamp bulbs to give the car more of a premium look.

The diesel range entry model – the 308 hatchback 1.6- litre HDi FAP 92bhp with a manual gearbox – has CO2 emissions of 110g/km. Bigger savings are achieved with the EGC gearbox.

The Oxygo e-HDi EGC with stop/start, which is due to launch in July, has emissions of just 98g/km.

However, there is a great deal of variation depending on equipment grade and the size of wheels specified, so fleets need to check carefully and advise drivers appropriately.

Micro-hybrid technology, improved aerodynamics and reduced weight – about 25kg lighter on average per car than the previous 308 – have helped Peugeot achieve the improved environmental efficiency.

We tested the Allure e-HDi model fitted with 18 inch alloy wheels, parking sensors and a panoramic roof. It emits 118g/km with a combined fuel consumption of 62.8mpg.

Inside, it’s clear that Peugeot’s build quality has improved and the large windscreen and panoramic roof help give the interior a light and spacious feel.

In real world driving Peugeot says that a 15% improvement in fuel efficiency can be achieved as a result of the system.

The e-HDi system is based around the combination of a 1.6-litre HDi Euro 5 diesel engine and a reversible alternator/starter providing the stop-and-start function.

It also includes an alternator control system (volt control) to recover energy during deceleration and a hybrid battery to store and deliver additional energy on start-up (e-booster).

An ‘eco’ light shows when the system is working and there’s also a meter to show how long the engine has been stopped for. Re-start is swift and virtually silent.

Peugeot reckons that the stop/start system has helped the 308 achieve higher residual values.

Safety is one of the CC’s strengths. Peugeot says it is the first coupé-cabriolet in the world to feature front seat protection with two rear airbags in the front headrests. ESP is also standard on all models.

The 308 can be converted into a cabriolet in 20 seconds and there’s not too much noise with the roof down thanks to the wind blocker mounted over the rear seats. There’s also a warm air diffuser system behind the necks of the front passengers for added warmth.

The steering feels lighter than in the hatchback and it’s a comfortable ride.

There are four trim levels to choose from – Access, Active, Allure and GT with prices ranging from £21,295 to £26,695, in line with other coupé-cabriolets.

Boot space is 465 litres with the roof up, and 266 litres in the cabriolet mode.

The 308 is a five-seater with the option of adding two rear seats for £525 on the Active and Allure models. There’s not a great deal of legroom on the third row, though.

This version has the lowest CO2 emissions of any seven-seat car on sale when chosen with the optional third row seats.

Like the hatchback and CC, the SW scored a five-star Euro NCAP rating. ESP, ABS and six Smart safety airbags come as standard.