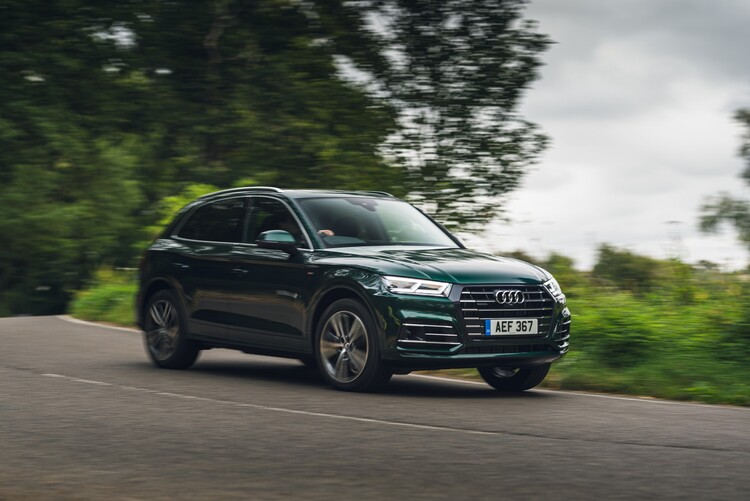 There’s been no shortage of new Audis this year. From the A1 to the SQ8, the expansion and renewal of the brand’s model range seems unrelenting.

There has been, however, a noticeable lack of low-emission plug-in hybrid models to suit company car drivers, but that is about to change rather rapidly.

The new Q5 TFSIe is the first of six new plug-in hybrid models that will be available to order before the end of the year.

With low CO2 emissions of 49g/km, the plug-in hybrid is not only the most efficient and cost-effective Q5 model, it is also one of the best performing.

Two versions are offered, the 50 TFSIe and the 55 TFSIe, offering power outputs of 299PS and 367PS. Both use a new 2.0-litre turbocharged petrol engine and electric motor, pushing power through a Quattro all-wheel drive system.

A 14.1kWh battery ensures a zero-emission range of up to 26 miles and Audi quotes a combined fuel economy figure of 113mpg.

Similar powertrains will shortly be offered in the new A3, A6, A7, A8 and Q7, with clear benefits for fleet drivers.

There is little to distinguish the TFSIe from its more conventional counterparts.

A keen eye will notice the charging flap on the rear nearside wing – a mirror image of the petrol filler flap on the other side.

With the Q5 already an established favourite in the SUV sector, adding an electrified powertrain has done little to limit its appeal. The boot is a tad smaller, but crucially the battery does little to impact the usable space – although you will have to factor in storage of the bulky charging cables.

Setting off in typical electric car silence, the Q5 plug-in majors on refinement. It has light controls, comfy seats and a soft ride.

We were impressed by the hushed petrol engine, often relying on the instruments to confirm which powertrain was actually running.

Our test model was fitted with the more potent powertrain, which provides a healthy shove of power and can reach 60mph from rest in 5.3 seconds.

During normal driving, the car doesn’t feel particularly responsive though. It takes a fairly heavy right foot and some time for the engine to spool up before things really get going.

While the all-wheel drive system provides plenty of grip, the weight of the battery pack and overly-light steering dampens any excitement in the bends.

Regular charging should enable drivers to complete most short journeys on electric power alone. Our experience of the car on longer trips saw 50mpg with a charged battery and around 30mpg without.