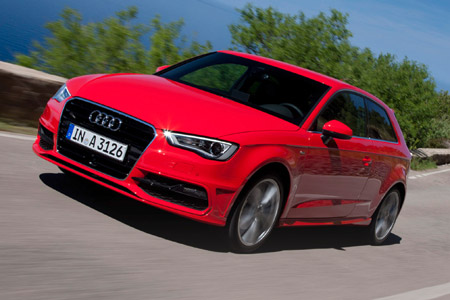 Audi claims the original A3 of 1996 defined a new sector of the market – the premium lower-medium car.

It’s an assertion that’s hard to challenge, as there is no shortage of evidence to back it up. BMW introduced the 1 Series in 2004 seeking a share of this high-volume sector, while Mercedes-Benz has given the latest A-Class a thorough revamp so it looks like a conventional hatchback.

Meanwhile Volvo, with increasing acceptance as an alternative to premium badge cars and perhaps even seen as deserving of a place on choice lists alongside the German brands, will soon introduce the V40 as a rival.

Lexus has the hybrid-only CT200h, while new Japanese premium manufacturer Infiniti plans to launch a compact car in 2013.

The Audi A3 has clearly been a benchmark for others to target, and given the success of the A3 so far, it’s under-standable that the company wouldn’t want to stray from a winning formula.

So the third-generation A3 looks familiar, with its complex LED daytime running lights echoing the latest A6 and rear light clusters split by the tailgate, while its profile almost matches the outgoing model.

But while it might be almost the same length as the car it replaces, its wheelbase is longer, creating a little extra room inside.

Much of the bodywork is made from aluminium rather than steel, while extensive use of high-tensile steel (which allows less to be used while maintaining strength) in the structure has also helped reduce weight.

Audi has also managed to use lighter engines, suspension and even seats and wiring with the result that the entry-level model is 80kg lighter than its predecessor.

Engines are revised or new, too, and the 2.0 TDI, which is expected to take the bulk of sales initially, has the most impressive set of vital statistics of all the variants at launch.

The front-wheel drive manual version achieves CO2 emissions of 106g/km and combined cycle fuel consumption of 68.9mpg, despite being more powerful than the outgoing
2.0 TDI in the second-generation A3.

Although this exact variant wasn’t available on the media launch, we spent most of our time in the Quattro variant (due in 2013), which still achieves a highly respectable 120g/km.

It feels a little livelier than the outgoing 140bhp 2.0 TDI, both in terms of acceleration and slightly sweeter handling, although the steering offers little in the way of resistance which might leave driving enthusiasts a bit cold.

But the overall effect of a longer wheelbase and weight savings across all areas of the car is a much more enjoyable drive than the previous A3.

The A3’s interior is less cluttered than before while the Multi Media Interface is simplified with a screen that is kept hidden in the dashboard until the car is switched on.

Air vents have an adjustable diffuser, while an electro-mechanical parking brake is standard.
Boot space is increased from a minimum of 350 litres to 365 litres, making it slightly larger than the BMW 1 Series luggage compartment.

Customers will be able to choose from SE, Sport and S Line equipment grades in the majority of variants at launch: engines are 1.4 TFSI (122bhp), 1.8 TFSI (180bhp) and 2.0 TDI (150bhp).
SE variants come with air conditioning, 16-inch alloy wheels, as with the outgoing model, but also add the MMI radio with folding screen and controls, Audi Music Interface, Bluetooth and voice control.

Customers can choose to add S Line suspension (lowered by an extra 10mm over Sport suspension) or remove Sports suspension, reverting to the standard set-up.

There is also a Bang & Olufsen audio option, MMI Navigation Plus and mobile phone preparation with Audi Connect, which includes real-time online traffic information and, through a WLAN (wireless local area network) hotspot, allows passengers access to the internet while travelling.

While the third generation A3 may face a greater number of challenges than ever in terms of rival products, Audi should feel confident it has retained a sector benchmark.