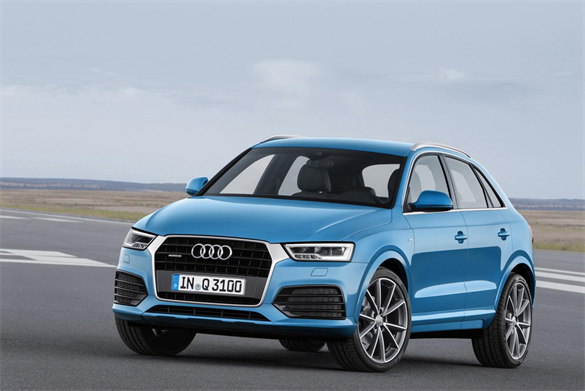 As premium brands and crossovers demonstrate strong growth in Europe, the Q3 must be one of Audi's most important models.

Three years on from its debut, it has been given a refresh with an updated look, new and revamped engines as well as more equipment.

All models now have the full body-colour paint finish (previously SE versions had dark plastic lower trim on the front and rear bumpers) and a new metallic effect grille surround.

S Line models have LED headlamps as standard, and ‘scrolling’ LED rear indicators that illuminate sequentially in the direction selected, part-leather seats, S Line suspension as a no-cost option and a power tailgate.

The entry-level diesel engine is the 2.0 TDI 150, offering 10hp more than the outgoing unit, but in front-wheel drive form has CO2 emissions from 119g/km – a reduction of  18g/km or four BIK tax bands. For Quattro four-wheel drive versions, emissions fall from 149g/km to 131g/km, just missing out on the 130g/km write-down allowance threshold.

However, there is now a petrol version that beats the  130g/km benchmark for the first time. The 1.4 TFSI 150 uses Audi’s cylinder-on-demand technology and runs on just two cylinders under light throttle loads or when coasting. CO2 emissions for this model start at 128g/km.

The bulk of corporate sales will be diesel versions, and the new 150hp 2.0 TDI offers a 7mpg improvement on the combined cycle over the 140hp engine it replaces.

In SE guise with 17-inch alloy wheels, the Q3 squares up against the EfficientDynamics version of the BMW X1 (which also achieves CO2 of 119g/km), although the S Line on 18-inch wheels achieves 122g/km. New for the revised model is a higher specification S Line Plus, which has 19-inch alloys and extra equipment.

On the test route, the SE felt more comfortable than the S Line and more forgiving of road surface imperfections.

The Q3 is compact and nimble enough to feel at home in all traffic environments, while the front-wheel drive diesel isn’t short of performance. The power upgrade means the 0-62mph sprint is achieved in 9.6 seconds instead of its predecessor’s 9.9, and the engine is both smooth and refined.

The Q3 also has more of a conventional SUV look than its X1 and Mercedes-Benz GLA rivals, which will boost its appeal.